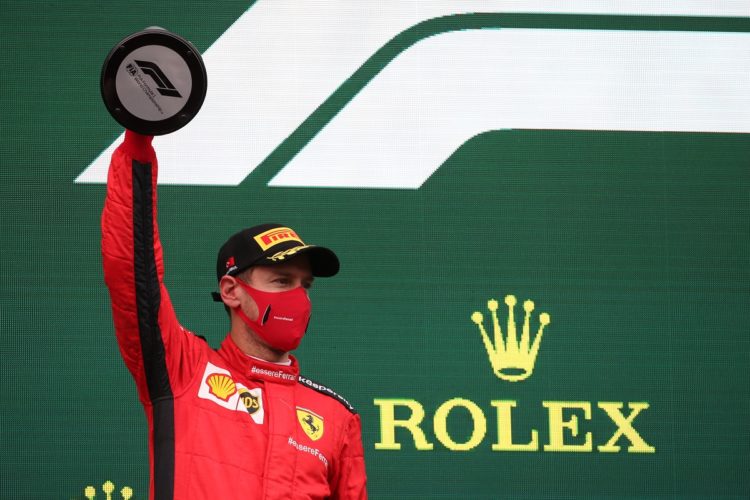 Vettel gained eight places on the opening lap and remained in podium contention throughout the rain-hit race, profiting on the final lap to move from fourth to third after team-mate Charles Leclerc slid wide.

It marked Vettel’s first podium finish of the year, having previously failed to finish higher than sixth, while Ferrari walked away with its best team result of the campaign as Leclerc held onto fourth.

“I’m very pleased for Sebastian, I think a podium for him is very important, finishing third,” Binotto said.

“It has been a very difficult season for him, I think he’s starting to be, at least now at the end of the season, comfortable with the car.

“He is delivering better. I think he made a good race, from the start, very consistent and had good pace, managing the tyres, holding the positions.

“And even the very last lap he did very well, he took the opportunity and that’s great for him, he just finished third, very close to [Sergio] Perez.

“But it’s great, I’m very happy for him. There’s still three races and hopefully we will do well in the next one.”

Binotto, who did not travel to Istanbul Park, expressed encouragement over the SF1000’s pace in recent races, reckoning it provides Ferrari with optimism heading towards the 2021 campaign.

“We know that we are improving the car and if you look at the last races, we improved our position in the race,” he said.

“I think the car has become more consistent, has become a bit faster. So it’s great to have those results because it’s great for next year, it’s great looking ahead as well to the next races.

“In terms of the Constructor positions, it’s not the end of the Championship so it’s encouraging.”

Ferrari is still only sixth in the Constructors’ Championship but now trails Renault by just six points.