After the Portuguese Grand Prix, Ferrari no longer brought visible updates on the SF1000, probably concluding the sequence of updates that started from the Russian GP onwards. 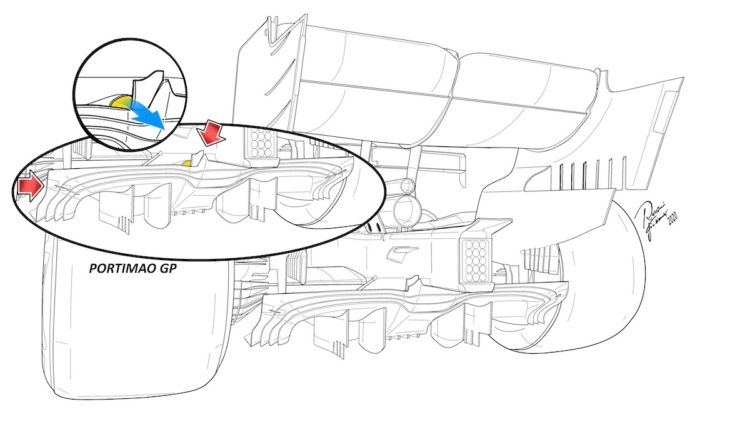 After the Portuguese Grand Prix, Ferrari no longer brought visible updates to the SF1000, probably concluding the sequence of updates that started from the Russian GP onwards.

Ferrari’s development work on the SF1000 was obviously bound (like all the teams) by regulations, which saw the “freezing” of most of the mechanical components for the two-year period of 2020-21, in order to reduce the economic impact on F1 teams. However, the aerodynamic development remains open, and it is on this front that we have seen Ferrari made headway from Sochi onwards.

The sequence of updates covered various areas of the car, although there was nothing striking, which had an important impact on the overall performance of this 2020 Ferrari. The direction taken in development by the engineers under team boss Mattia Binotto, although small, seems to be working with Ferrari showing improved pace in recent races. However, the difficulties in getting the tyres up to temperature remain, as we saw in Imola and Istanbul in qualifying. This problem is probably also attributable to how the suspension acts in the transmission of the aerodynamic load on the rolling strip, and on the internal structure of the tyre, which cannot always enter the right window of use in cold asphalt conditions.

On an aerodynamic level, it is possible that the Maranello team has finished the sequence of aerodynamic updates for the Vettel and Leclerc, and between now and the end of the season it is likely that we will not see any other significant updates. Indeed, most likely Ferrari is already concentrating most of the technical focus on the 2022 car.

The latest updates brought to the 2020 car at Portimao mainly concerned the rear: Ferrari introduced a new diffuser specification, with some micro-aerodynamic touches, combined with a new floor. The new diffuser is interesting to analyse as it has, on the sides of the deformable structure, a sort of channel that conveys air to the upper area of ​​the diffuser. A solution already seen in the past on Ferrari, taken up by the technicians of Maranello in the Portimao and Imola. The new diffuser was also confirmed in Istanbul, and in the drawing below we have highlighted the differences compared to the previous specification.

The work of the Maranello technicians will concentrate a lot in the rear area also with a view to 2021, where they will probably act immediately, spending the tokens necessary to modify the parts that have been approved this season (deformable structure, suspension attachments, gearbox etc.) The task will above all rest with the return of Simone Resta, who had recently joined Alfa Romeo Racing.

However, Ferrari did not neglect the work of the front area, and again in Portimao there was a further modification to the front wing flaps: there were many versions of the front wing this season for Ferrari (also for adaptations to individual circuits), and in Portugal Ferrari has further revised the last flap at the top, which in the latest specification has a thinner shape in the area in the direction of the Y250 coordinate, while near the device that modifies the incidence it has a sort of hump at the back. This latest version was confirmed both in Imola and in Istanbul, with Ferrari still looking for the right compromise between drag and vertical load.

It will be interesting to see where and if Ferrari continues to bring updates to the SF1000 after Istanbul for the final races of the season. For regulatory continuity, it is logical to suppose that everything will also be aimed at collecting data in view of 2021, to try to bring a car to the track which will have the task of becoming competitive, even if starting by (force of things) from the basis of the SF1000 project.