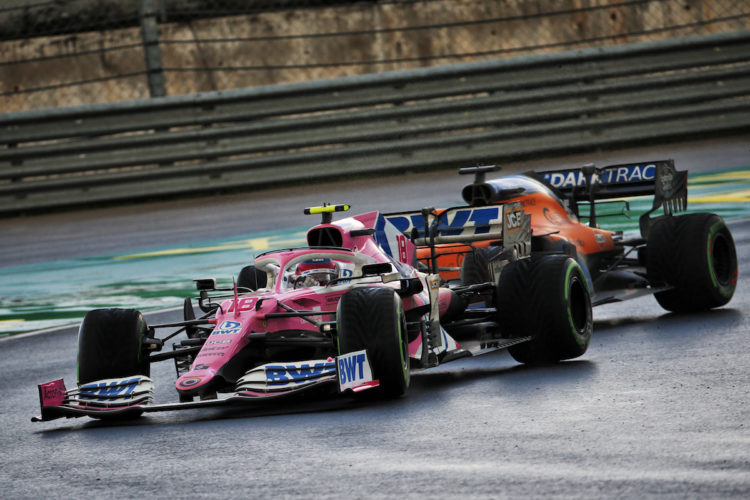 Lance Stroll was left confused over the extent of his tyre issues at the Turkish Grand Prix, as he failed to convert his pole position into a strong result for Racing Point.

After shocking the sport on Saturday to become Formula 1’s 101st different pole-sitter, Stroll held his lead on the opening lap and shot off into the distance.

The Canadian controlled the first half of the race, leading by some margin before he began to lose time to team-mate Sergio Perez after making a switch to Intermediate tyres.

Stroll says he suffered massive graining on the compound and pitted for a fresh, second set on lap 36 of the race.

However, the strategy call failed to prove to be beneficial as Stroll lost further time, eventually crossing the line in ninth place.

“It was [a] new [set of tyres], but just grained again massively, no pace,” Stroll said. “So we have to look into it, [it] was pretty terrible today.

“I mean I don’t understand, we had so much graining on the first set of Inters, we decided to pit, [we] were losing seconds per lap.

“I don’t know where the graining came from, it happened instantly.

“It’s frustrating when you’re in the lead by 10 seconds and you finish ninth, I don’t understand how it happened. I mean I do, it’s graining, but we need to look into why it hit me so much.”

Amid Stroll’s struggles, his team-mate Perez stayed out on the track on his aging Inters which was enough to secure a podium, despite coming under pressure from Ferrari on the final lap.

With three races remaining this season, Racing Point currently sits third in the Constructors’ Championship, five points ahead of McLaren.