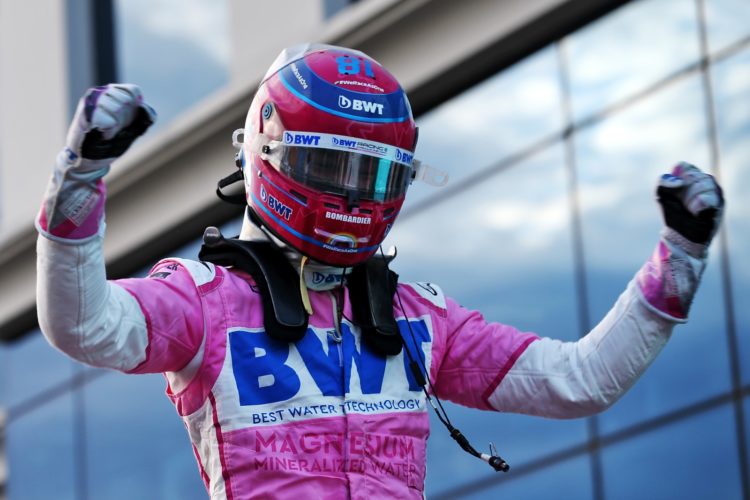 Persistent wet weather affected proceedings through Saturday’s action at an Istanbul Park circuit that had already lacked grip due to its recent resurfacing.

Red Bull and Racing Point came to the fore during Q3 as a slippery track gradually gripped up.

Max Verstappen had flown throughout qualifying, at times several seconds faster than his opposition, and laid down an early benchmark on Wets.

But he was usurped by Intermediates-shod Sergio Perez and despite setting rapid sector times on Wet rubber Verstappen was called in to also change to the green-banded tyres.

Perez went off, thwarting his prospects, while Verstappen struggled on the Intermediate tyres compared to the advantage he had on Wets.

As he tried to get the tyres up to temperature Stroll, already on Intermediates, jumped to the top of the table with a time of 1:47.765, 1.6s faster than his team-mate.

It marked Stroll’s first career pole and the first for Racing Point since its Force India guise in 2009.

However Stroll is one of a number of drivers under investigation for an alleged yellow flag transgression in Q1.

Alexander Albon was never in contention for top spot but ensured Racing Point and Red Bull rounded out the leading spots as he qualified fourth.

Mercedes off the pace

Mercedes had romped to all 13 pole positions so far in 2020 but its prospects of a clean sweep for the season already looked in doubt early on in the session amid Verstappen’s speed.

Neither Lewis Hamilton nor Valtteri Bottas troubled the leading positions and the duo finished sixth and ninth respectively.

It was a strong day for both Renault and Alfa Romeo.

Daniel Ricciardo and Esteban Ocon took fifth and seventh respectively for Renault while Alfa Romeo had both cars in the top 10 for the first time all season.

Kimi Raikkonen escaped a wild moment early on when he spun at high speed on the run to Turn 3 but recovered to eighth, with Antonio Giovinazzi at the foot of the top 10.

McLaren and Ferrari drops out in Q2

McLaren and Ferrari struggled for outright pace during the session and both teams had their drivers eliminated in Q2.

Lando Norris was 11h, with Carlos Sainz 13th, while Sebastian Vettel took 12th to out-qualify Charles Leclerc for the first time since the Hungarian Grand Prix.

Leclerc almost didn’t make it into Q2 after sliding wide through Turn 1 in Q1 and only narrowly making it out of the gravel.

The Ferrari drivers were five and six seconds slower respectively than Verstappen in Q2.

The opening part of qualifying took around 70 minutes to complete on account of a long delay when early drizzle intensified to leave the circuit undriveable.

When Q1 resumed Haas’ Romain Grosjean caused another stoppage when he went off at Turn 1, leaving only a handful of minutes for the field to complete their laps.

There were few surprises as Kevin Magnussen joined Grosjean in the drop zone, along with a spinning Daniil Kvyat and the Williams duo of George Russell and Nicholas Latifi.

But Latifi spun through Turn 8, leaving his Williams beached in the gravel, and a large number of drivers went on to set their personal best times.

A raft of drivers are currently under investigation for setting times under yellow flags – while Race Control then got Q2 underway before the retrieval of Latifi’s car was completed.