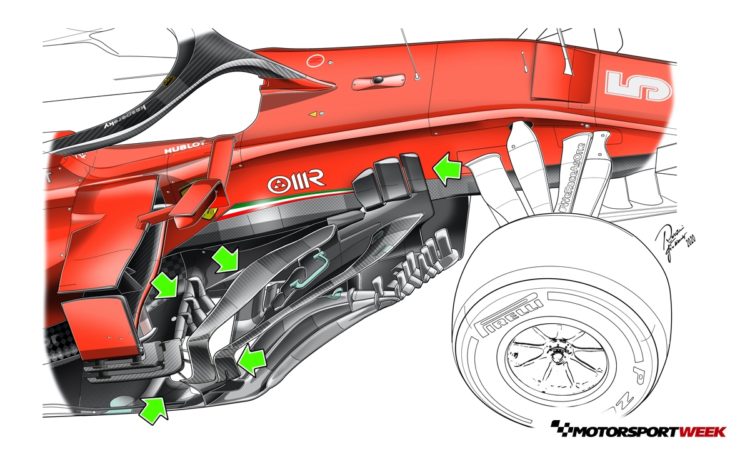 Maranello continues its development of the SF1000, and further technical innovations have arrived in Portimao this weekend for the Portuguese Grand Prix, which continue the evolutionary steps started in Russia as Ferrari sets about its recovery.

The novelties seen on the Ferrari SF1000 include two aerodynamic packages: one that continues the development of the 2020 car, and the other that serves to collect data in view of the technical changes in 2021.

UPDATES FOR 2021
Starting with the latter, Ferrari has brought a flat bottom that complies with next year’s aerodynamic constraints, that is: bottom cut diagonally towards the rear wheels, and abolition of all air slots to seal the flow at the floor.

In fact, the 2021 technical regulation imposes much more restrictive margins on the engineers with regards the aerodynamic load produced by the floor. Everything was born with the aim of limiting the evolutionary leap that the teams will make next season, in order to contain the physical stresses to which the Pirelli tyres will be subjected, which in 2021 will be available to teams with the same compounds as this season.

The goal was to reduce the overall downforce generated by 10 per cent. McLaren in Belgium also tested the version of the 2021 floor, resulting to date, together with Ferrari, the only team to have collected track data with this solution.

Subsequent estimates by cooperative work between team engineers and FIA technicians have revealed that the impact this aerodynamic constraint will have on next year’s downforce will not be as significant. This is why another area of ​​intervention in the 2021 aerodynamic regulation concerned the diffuser, with the flaps under the extractor that will be shorter than 50 mm from the reference plane, as we see in the drawing below.

Ferrari brought a diffuser with shorter internal bulkheads, in order to respect the 50mm constraint. A real work of data collection with a view to 2021 for the technicians of Maranello in Portiamo, who have focused part of the work of the first free practice sessions on the 2021 car.

UPDATES FOR 2020
For the rest of this season, Ferrari has instead brought a further flat-floor specification, with the implementation of three vortex generators in front of the rear wheel. The purpose is to reduce the turbulence affecting the rear tyre, creating an aerodynamic barrier to reduce drag. A solution that retraces an old aerodynamic philosophy seen last year on the SF90, and resumed on the 2020 car. second.

The package of novelties seen in Germany with regard to bargeboards was also confirmed in Portugal: last weekend of the Grand Prix Ferrari had brought an important change to the layout of the flow deviators on the sides, however competing in the Eifel GP with a hybrid solution between the new and old barge board configuration.

The rain during free practice had affected Ferrari’s data collection work, which then gave up in the race and qualified to use the entire package. In Portimao free practice the climate was mild, and we saw an SF1000 right away with the most updated solution. Specifically, the new deviators had been revised in the area of ​​the double boomerang, and of the vertical strips on the sides of the bellies.

The large flow diverter had been revised in the area of ​​the leading edge near the front suspension, where the first element with blowing had been shortened (in official sessions the old version was then used). In addition to the Ferrari flow deviators for the Eifel GP, it had introduced a small modification to the “teeth” of the front part of the bottom, in the area that surrounds the lower anti-intrusion cone, to laminate the flows flowing in the lower part of the car, to the diffuser.

Comparative aerodynamic load tests were carried out on the front wing, with Ferrari also testing the very unloaded version, seen in free practice in Belgium and in Monza. In fact, in the photo below, we see how the upper flap of the lower front wing is cut in the upper edge. Ferrari which probably carried out the test of the cut 2021 floor, with the front wing more discharged, in order not to unbalance the SF1000.