Technical Insight: Ferrari to focus on rear-end development for ’21 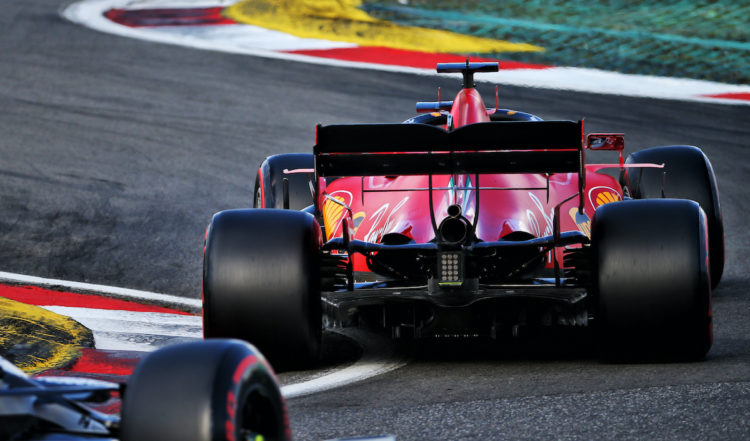 The Eifel Grand Prix was a little kinder to Ferrari, with Charles Leclerc obtaining a second-row start before going on to score some much needed points.

However the Nurburgring showed up all the shortcomings of the SF1000, which can’t simply be overlooked because of a better result for the Scuderia.

Leclerc had to deal with a car lacking in race pace and tyre management, with the latter down to heavy graining due to the very low temperatures in Europe at this time of the year. Meanwhile the less said about Sebastian Vettel’s race the better – the German continues to struggle with how the car drives and will be hoping his Aston Martin suits his style better next year.

On a technical level, Ferrari brought some technical updates to the Nurburgring, introducing new barge-boards to the SF1000, and a modification to the underside of the nose. These technical changes are a continuation of the package of updates and developments expected on the SF1000 from the Russian Grand Prix onwards.

Bargeboards: The new flow deviators have been revised with various new elements, including a double horizontal wing in the shape of a boomerang and vertical strips on the sides that form individual elements (arrows 1 and 2).

Compared to the previous specification, the first flow diverter, just behind the suspension triangle (arrow 3), has also been slightly revised. However, this slight change was not seen in the race and qualifying sessions, instead Ferrari raced with a hybrid solution, mixing old and new parts.

Arrow 4 indicates the modifications to the initial part of the floor – the one that wraps the lower deformable structure of the frame. Ferrari has slightly modified the inlet to bring more air to the floor. The vertical “teeth” protruding from the edge of the floor (arrow 5) have also been modified to divide the air flow into four parts, which will then be channeled to the diffuser.

Vortex Generators: These small innovations in micro-aerodynamics must work in synergy with the other small innovations already seen in Russia. In Sochi, in fact, Ferrari had slightly modified the aerodynamic devices placed in the lower part of the nose/chassis, which manage the air-flow that surrounds the lower part of the car after the front-wing.

In the illustration above you can see the vortex generators which were added in Sochi, for a total of eight small elements. The generators have the task of creating mini-tornadoes, which develop their conical section towards the rear, creating a sort of aerodynamic barrier to keep the air flowing along the sidepods adhered to the bodywork.

Rear-Wing: In Russia, the biggest novelty concerned the rear of the SF1000, where the side bulkhead of the rear-wing has been completely modified, which now has an aerodynamic philosophy very similar to that of the Mercedes W11.

It seems that Ferrari is working on an aerodynamic development more focused on the rear of the car, which turns out to be the real weakness of this SF1000. With the 2021 “token” regulations, many components have been homologated and frozen, and cannot be developed, except at the expense of development tokens, which are in short supply!

In this table we can see all the elements approved for 2021 in the dates of July and September, and how many tokens must be spent to make changes.

The aerodynamics and the Power Unit remain free from these regulatory constraints, even if the Federation has established a maximum number of hours that can be spent in the wind tunnel. Ferrari, which is forced to play catch-up for 2021, will have to bring a single-seater to the track that will be a direct descendant of the current SF1000, therefore starting already with a significant handicap.

The development at the rear should concern the aerodynamic part, remembering that the suspensions and gearbox were homologated on the two dates of July and September granted by the FIA. At the aerodynamic level, the rear axle will also suffer a limitation as regards the floor, which for 2021 by regulation will be narrower in the direction of the diffuser, resulting in less impact on the vertical load of an F1 car.