No big package of updates for the car by Vettel and Leclerc, but only small aerodynamic adjustments and adjustments to the car for the Sochi circuit. 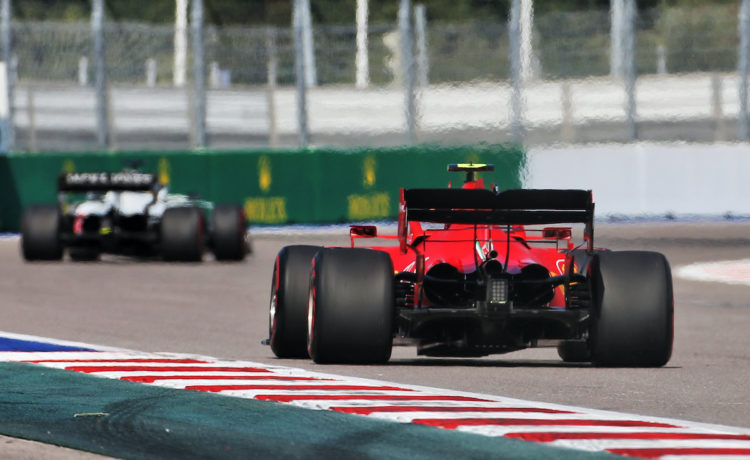 For the Russian Grand Prix, rumours that Ferrari would finally bring some technical innovations to its SF1000 were confirmed. There was no major upgrade package as had been rumoured, but small aerodynamic adjustments and a new rear-wing.

The most important upgrade for the SF1000, in view of 2021, should come later this season.

The real upgrade at the weekend concerns the rear-wing endplate, which is completely new, with a shape very similar to that of the Mercedes W11.

The new endplate features a stepped edge at the top, abandoning the older, more linear and traditional L-shaped solution. This new solution is virtually identical to the Mercedes and Racing Point design, with the reigning champions modifying the endplate, using this configuration at Hockenheim last year.

The fringes have also been revised, which are wider and have been cut down to three. A completely different solution compared to the old solution mounted on the SF1000, and inherited from the SF90, which manages the vortexes coming from the rolling of the rear tyres in a different way.

The 3 diverters adhering to the bulkhead remain almost unchanged, moving the flow upwards, near the Shell V-Power sponsor logos.

Both types of front-wing seen during the season were brought to Sochi on the SF1000, with Ferrari using a hybrid solution between the two comparatives used so far throughout the season.

The flaps and the main plane are those of the older front-wing, while the sidewalk of the endplate has been updated and the team ran comparative tests on Friday, finally deciding on the wing with the highest load. The lighter solution, discarded on Friday, provides a greater out wash effect, but creates more understeer in the 90 degree medium/low speed corners of the Sochi circuit.