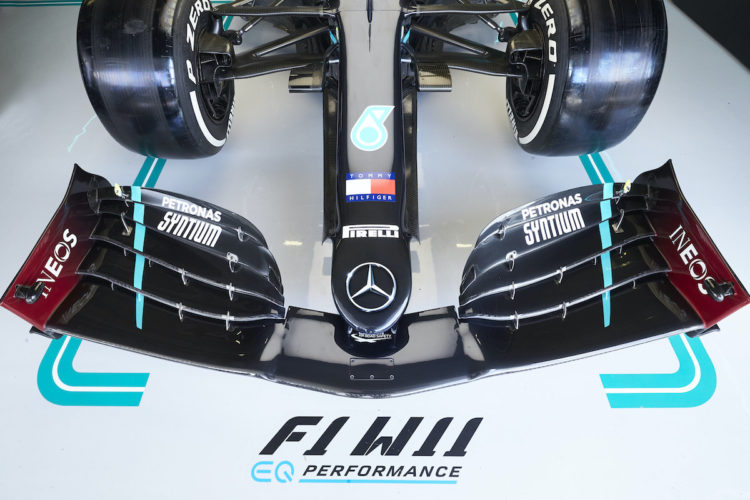 The front wing on a Formula 1 car is one of the most important elements that make up the aerodynamics of the car. It is the first aerodynamic part that comes into contact with the undisturbed air flow, and for this reason it is responsible for how the air flow will interact with the rest of the car.

Therefore even if you have the most efficient bargeboards, diffuser and rear wing, it’s all useless without an efficient front wing that is channeling the airflow exactly where it’s needed, and not only that, but conditioning it so it arrives in a useable manner.

The front wing of a modern F1 car is made up of various elements, some of which are subject to intense development throughout the course of a season.

Technicians and designers are able to achieve exceptional aerodynamic efficiency values, thanks to the use of fluid dynamic simulators such as CFD (computational fluid dynamics) and the processing of wind tunnel data.

A common mistake is thinking that the front wing’s sole focus is creating downforce for the front wheel axle, but above all that is preparing the airflows that will then hit the rest of the car and in the correct way.

However, the front wing is one of the elements of an F1 car that is most subject to regulatory constraints, which determine its dimensions in width and height, even regulating its maximum flexion. The front wing, in fact, is one of the most similar parts among the different cars, precisely because of how tight the regulations are that govern its design, offering little in the way of freedom.

We don’t tend to see anything radical in terms of development of the front wing, not because they don’t want to, but because they are banned by the regulations.

To facilitate overtaking and make them less sensitive to turbulence, the FIA radically simplified the design of the front wings starting from 2019, abolishing all additional cantilever aerodynamic profiles, better known as upper flaps.

By regulation, a front wing can protrude for a maximum of 1000mm from the perpendicular axis that is in the centre of the car, and can have a height of 300mm from the reference plane (which by regulation is the floor of the T-tray ). The front wing is composed of the main plane, (which is the element that the FIA ​​submits to bending checks during the technical inspections), which must have by regulation a neutral zone of 250mm starting from the central axis, and have a more forward position than its lateral extremities, giving the front wing the classic arrow shape.

In the lateral area of ​​the main plane there are drifts (or endplates) which have the purpose of diverting the flow of air towards the outside of the front wheels, to reduce strong harmful turbulence that the uncovered wheels of an F1 car generate. In the upper part we find the spoilers (which by regulation cannot be more than 5 elements), and which are responsible for the formation of the downforce on the front axle. These elements, by regulation, must not exceed the coordinate of 250mm from the central axis.

To their advantage, however, the teams try to exploit the turbulent flow that develops between the nose and the inner area of ​​the wheel, called the vortex Y250 (Y is the axial coordinate and 250 is the distance in mm from the origin of the reference system Y ). The teams study the shape of the spoilers in order to recreate a vortex, which is then exploited by the other aerodynamic parts behind the front wing (turning vanes, bargeboards, floor, etc).

In addition there are some sensors on the front-wing which have little aerodynamic purpose. There is a thermal chamber, which keeps an eye on the temperatures of the front wheels, and the incidence modifier through which the teams modify the aerodynamic load of the spoilers. Changing the incidence of the spoilers allows you to adjust the car’s understeer and oversteer levels.

In this image we can observe the approximate flow of a front wing.

With the new regulations that came into force in 2019, the teams have been able to interpret the study of the flows that will by-pass the front wheel in a different way, without the aid of the upper flaps.

Teams such as Ferrari, AlphaTauri and Alfa Romeo went with an out-wash front wing approach, which moves the flows to the outside of the front wheels via a low upper flap and endplate cutout. The other teams, on the other hand, studied a less extreme solution, with the flows that were mainly directed over the top of of the front wheels (in wash). For 2020 some teams such as Mercedes and McLaren have moved more towards the out-wash approach, with the spoilers becoming more neutral in the outer area, creating a channel that accompanies the flows towards the outside of the front wheel.

In this photo we see a comparison between the choice of the Mercedes W10 at the beginning of the season, and the W11.