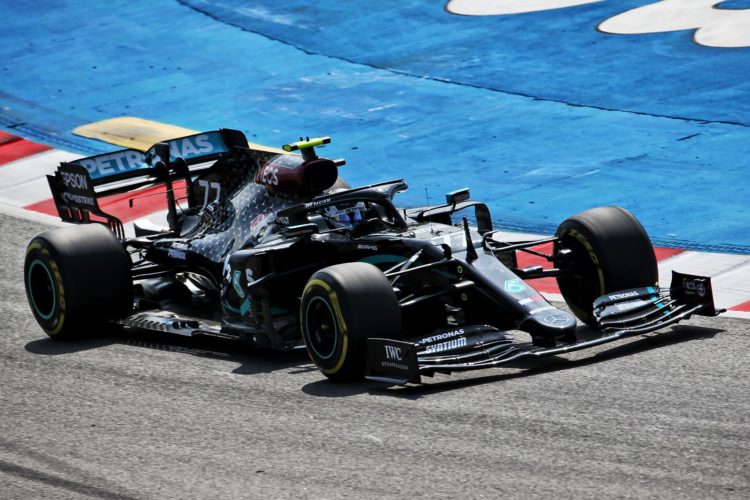 Mercedes comfortably set the pace as Formula 1 action got underway at the Circuit de Barcelona-Catalunya on Friday morning ahead of the Spanish Grand Prix.

Formula 1 has travelled straight from Britain to Spain to the regular pre-season testing venue for the sixth event in just a seven-week spell.

Spain’s round was due to take place in May but was postponed until August due to the Covid-19 pandemic, with no spectators permitted entry, as per the opening five rounds.

Mercedes, following on from its first defeat of the campaign at Silverstone, once more finished ahead of the field on one-lap pace, with Valtteri Bottas clocking a time of 1:16.785.

The best time was around a second slower than Bottas achieved during pre-season testing, which came in more favourable track conditions, and on the C5 compound – which is unavailable this weekend.

Bottas used the Soft tyres – which for this weekend is the C3 compound – to finish 0.039s clear of Mercedes team-mate Lewis Hamilton.

As has been the case in qualifying trim this year Mercedes was significantly clear of its nearest opponent, with last weekend’s victor Max Verstappen best of the rest for Red Bull.

Verstappen’s best time was 0.939s down on Bottas’ benchmark and he was the only driver to finish within a second of the Mercedes drivers.

Customer team Haas also put in a more competitive showing at historically one of its stronger circuits, with Romain Grosjean sixth and Kevin Magnussen ninth.

Perez, whose RP20 was driven by Nico Hulkenberg in his absence, was cleared to re-enter the paddock after returning a negative coronavirus test earlier in the week.

Perez was the quickest of the Medium tyre runners as he classified seventh overall, in front of Red Bull’s Alexander Albon, Magnussen, and Racing Point team-mate Lance Stroll.

McLaren finished 11th and 13th, with local representative Carlos Sainz Jr. ahead of Lando Norris, split by the quickest Renault of Esteban Ocon.

AlphaTauri and Alfa Romeo were next up, with Pierre Gasly, Antonio Giovinazzi and Kimi Raikkonen covered by less than a tenth of a second, and Daniil Kvyat – running a fresh Honda engine – close behind.

A new face at Williams

Nissany, son of one-time Minardi tester Chanoch, joined Williams for 2020 with backing from his native Israel.

He finished at the foot of the timesheets, via a spin under braking for Turn 10, but was only three-tenths down on regular driver Latifi.

Russell will return to action for the second session.