Red Bull in Austria presented itself with small technical innovations on the RB16, with a new nose layout and with the new floor already seen on the Silverstone filming day. 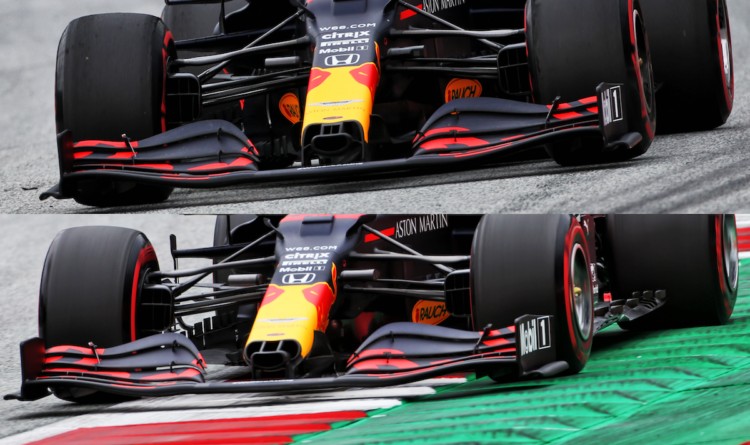 Red Bull trialled two nose concepts during practice for the Austrian Grand Prix along with the floor we previously saw on the RB16 during their Silverstone filming day last month.

Adrian Newey continues to ‘copy’ from Mercedes, and during free practice the team trialled a new front nose, with pylons situated very close to one another, very similar to the solution adopted by the W11.

The narrow pylons reduce the air intake section in the lower part of the car, but better energise the air that will be directed to the bargeboards.

Compared to last season, the Red Bull has taken a lot of inspiration from its main rival, the Mercedes W11, with a much narrower nose, longer flow diverter (also known as the cape), replacing the traditional turning vanes.

During the session, Red Bull tested both the old nose specification (with wider pylons) and the new one in anticipation of a final choice for qualifying and the race.

Meanwhile the newer floor, which was given a run during practice, has a greater number of flow deviators in the direction of the rear axle, which move the air outside the rear wheels, generating vortices useful to reduce aerodynamic noise.