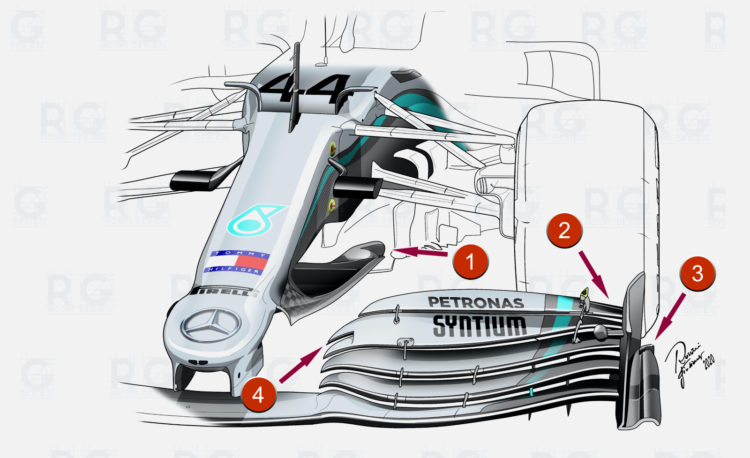 For the 2020 Formula 1 season Mercedes’ engineers at Brackley have worked hard, under the guidance of technical boss James Allison, to increase the aerodynamic efficiency of its package.

The rake set-up and a greater desire for an outwash approach are the main technical innovations of its W11, as well as chasing engine power, in the wake of being left behind by Ferrari in 2019.

Despite Mercedes dominating last year, taking 15 wins from 21 races, the squad has continued to target its weak points, despite the risks in unearthing the perfect balance in terms of the aerodynamic loads of the W10.

To improve aerodynamic efficiency, Mercedes worked a lot in the front area of ​​the car, i.e. the part of the car that has the first aerodynamic impact with the air.

The cape – which channels airflow from under the nose of the car to various areas including the floor and sidepods – has been further tapered (1), which can also be seen in the area where the suspension triangles are, even more protruding from the chassis than on 2019’s W10.

Reducing the resistance to progress, without losing vertical force, was one of the targets set by the technicians led by Allison. The W11’s features are not only the much-publicised Dual-Axis-Steering (DAS), but it is also and above all a single-seater that always continues to improve its performance year after year.

Making a direct comparison between the front-wing of the Mercedes W11 and the W10, it is noted that the aerodynamics are more marked towards out-wash (2) than in 2019, when a major front-wing update was introduced at the Spanish Grand Prix.

At the beginning of 2019, Mercedes had profiles with a larger string towards the endplates, to divert the air flow over the front wheels (in-wash), unlike out-wash which pushes air around the outside of the tyre, as opposed to over it.

For 2020, Mercedes’ engineers have worked hard in trying to reduce the overall drag of the W11, and the new front-wing is more geared towards an aerodynamic philosophy already seen on the Ferrari – although to a lesser degree with Ferrari’s approach considered fairly radical when it debuted.

The base of the endplate has also been modified (3), to help shield the front wheels from flows to the outside, and reduce air resistance. The Y250 area (4) that generates the famous aerodynamic vortices has also been slightly modified to better control flow.