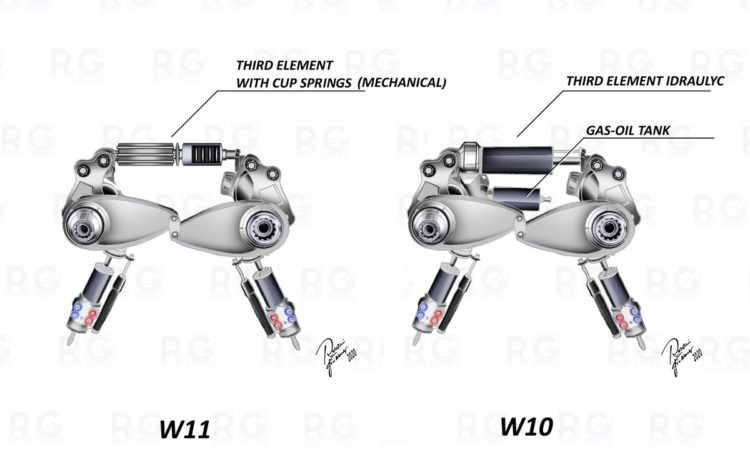 Mercedes have made some major modifications to the W11 compared to last year’s W10, tweaking many technical details of the championship-winning car.

But the major talking point was of course the dual-axis-steering system (better known as DAS), which took the paddock completely by surprise, and somewhat the FIA which believed the system would be too hard to develop.

To facilitate this change, Mercedes have made some front suspension changes.

In previous seasons, Mercedes has always used a third hydraulic element on the push rod suspension (see drawing above), with the struts directly connected to the oil/gas piston of the upper shock absorber.

However on the Mercedes W11, technical chief James Allison was inspired by Ferrari, adopting a third mechanically operated shock absorber, with the classic cup springs for pre-loading. The springs of the third element are not helical, but are of the belleville type, i.e. formed by circular disks of constant thickness. The third mechanical element is also much lighter than the hydraulic one, and has a smaller dimension.

This technical solution could be connected to the DAS system, which acts directly on the front-suspension and on the convergence angle of the front-wheels.

Compared to the mechanical shock absorber, the hydraulic shock absorber has a lighter behaviour and transmits the asphalt disconnections in a more linear way, without pitch peaks. Mercedes has also introduced greater rake on the W11, meaning the front is much lower to the track than the rear.

The third mechanical element helps Mercedes to maintain a more rigid behaviour, improving the handling of the car at the front under braking.

Compared to Ferrari and Red Bull, Mercedes has been using torsion bars with asymmetrical rocker arms for several seasons, which helps the car maintain the best set-up when cornering, reducing the roll of the car.