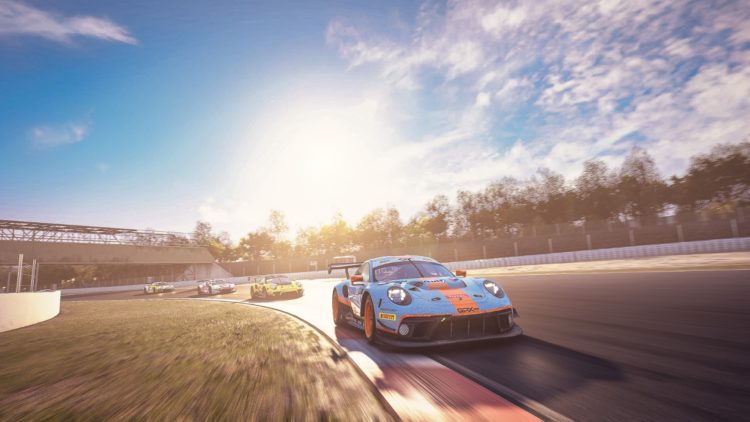 Deletraz started from pole position in his Porsche 911 GT3R, with one-off competitor Federico Leo alongside. Leo was one of two wildcard entrants into the event, the other being McLaren team boss and CEO Zak Brown, who took Jenson Button’s spot on board the Jenson Team Rocket RJN McLaren 720S GT3.

As the race got underway, Deletraz retained the lead ahead of Leo, Spa winner Lorenzo Marcucci and Arthur Rougier and managed to escaped carnage when a midfield competitor suffered from a technical issue.

Mikael Grenier claimed his screen went black as he approach the first corner. Blindslightred, the Canadian racer lost control of his Lamborghini and smashed into the midfield pack, causing chaos in the process.

One of the drivers caught up in the mayhem was Barnicoat, who had started in the midfield after a disappointing qualifying and subsequently could not avoid getting caught up in the pileup on the opening lap.

Up front, the battle for the lead quickly came down to Deletraz, Leo, Marcucci and Rougier and the four cars remained close to each other for much of the race. Marcucci briefly lost third place to Rougier early on after a failed attempt at overtaking Leo’s Porsche for second, but quickly regained lost ground while Deletraz was seemingly unable to form a gap to his nearest rivals.

The Formula 2 star’s lucky break eventually came when Leo appeared to briefly lose traction and had an oversteer slide, which immediately resulted in a challenge for position from Marcucci.

The slide and subsequent scramble for second place was all Deletraz needed to break away from the cars behind and quickly built up a gap of well over a second, which he would not relinquish.

The Switzerland native took victory after narrowly being denied a win at the previous round at the Nürburgring, while Marcucci eventually overcame Leo to finish second and third, with Rougier fourth.

Ivan Pareras made it three Audis in the top five with a solid performance ahead of David Perel, Dan Wells, Ezequiel Perez Companc and David Fulmanelli.

Nicolas Hillebrand fended off a late challenge from the Bentley of Andy Soucek to come home in tenth, but since third-placed Federico Leo was a wildcard entry, he would not score points, therefore the final awarded point went to eleventh-placed Soucek.

Ben Barnicoat just finished outside the points in twelfth place and subsequently lost his championship lead to Deletraz.

Deletraz now leads the Pro championship standings with 59 points, having scored points in all previous rounds of the championship. A victory at Spa-Francorchamps and podium finish in Barcelona sees Lorenzo Marcucci second in the standings, ten points clear of Deletraz while a difficult outing for Barnicoat sees him drop to third with 43 points.