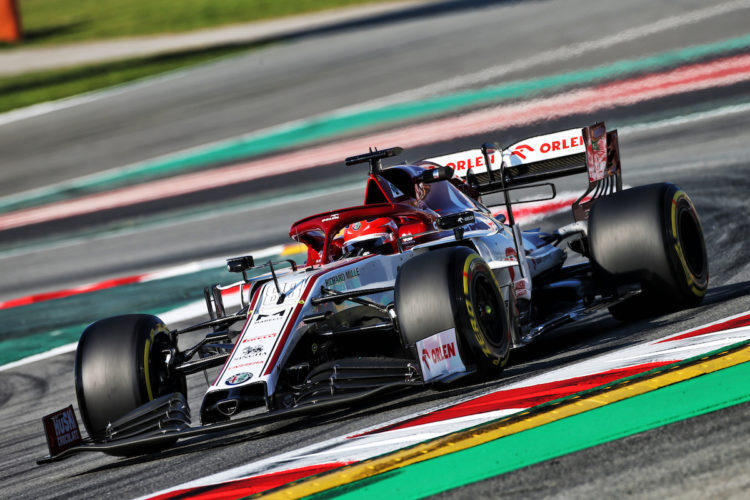 Alfa Romeo test driver Robert Kubica finished at the head of the pack as Formula 1 testing resumed at the Circuit de Barcelona-Catalunya on Wednesday.

All bar Haas split running between drivers, undertaking the necessary seat swaps and pedal alterations during the lunch break, on another warm and sunny day in Spain.

Kubica, who last year raced for Williams, had his second half-day of pre-season testing in Alfa Romeo’s C39 and clocked a time of 1:16.942s, using Pirelli’s C5 tyres.

Only the Mercedes drivers have set a quicker time so far during the course of pre-season running.

Max Verstappen finished second, 0.405s behind Kubica, on a day in which Red Bull’s running started late and then came to a premature halt.

Alexander Albon spent a substantial portion of time in the garage during the morning as Red Bull addressed its suspension, and he went on to complete only 29 laps.

Verstappen then brought the afternoon session to a halt five minutes from time when he spun through Turn 10, coming to a halt in the run-off.

Sister team AlphaTauri also endured a couple of problems on the opening day of action.

Pierre Gasly managed only 25 laps in the morning due to a loose pipe on the AT01 while Daniil Kvyat stopped on the approach to Turn 9 just as Verstappen spun.

They nonetheless finished fourth and fifth respectively on the timesheets, with Kvyat in front of Gasly.

Ferrari had another subdued day of running with its SF1000 as Sebastian Vettel caused one of two red flags when he spun during the morning session.

Vettel drifted wide through Turn 7, dipped a wheel into the gravel, and spun through the exit, dragging the gravel back onto the circuit.

He was able to recover to the pit lane but finished the day down in 10th, while afternoon driver Charles Leclerc was 13th.

This year’s sole rookie Nicholas Latifi had his morning running compromised when an oil systems issue halted his Williams FW43 along the back straight.

Latifi finished 14th, with George Russell – who took the reins of the car after lunch – finishing 15th.

Romain Grosjean carried the duties for Haas throughout the day – becoming the only driver to rack up over 100 laps – and he finished 16th as the team’s quiet pre-season continued.

All bar Raikkonen and Ocon finished within two seconds of leader Kubica.

The penultimate day of pre-season testing will begin at 09:00 on Thursday.