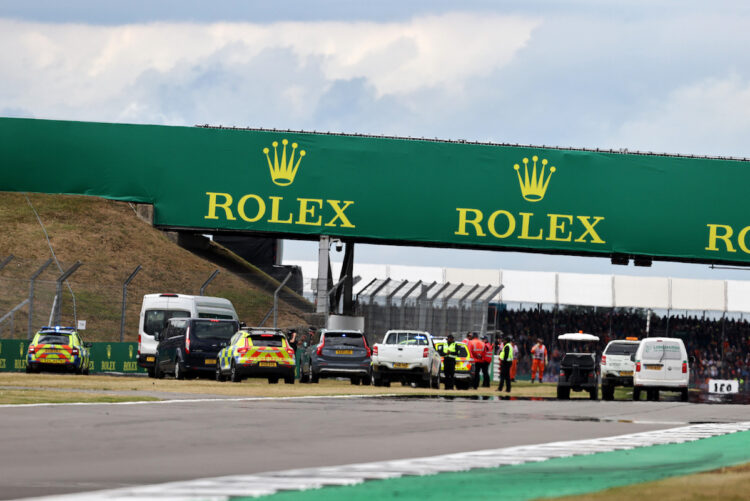 A group of protesters who invaded the Silverstone Circuit during last year’s British Grand Prix were told in court that they risked inflicting “serious harm” to Formula 1 drivers.

Six members of the Just Stop Oil group appeared Northampton Crown Court on Wednesday, where they all denied causing a public nuisance.

Brocklebank, Gibson, McKechnie, Mogie and Smith, stormed the track on the opening lap while Baldwin was found in a car park with glue, cable ties and banners baring the group’s name.

The race was red-flagged in the opening moments following a horrifying accident for Zhou Guanyu, from which he emerged uninjured.

Footage was shown to the jury of AlphaTauri’s Yuki Tsunoda and Alpine’s Esteban Ocon passing the protestors, who had sat down on the Wellington Straight.

The prosecutor, Simon Jones, argued that the drivers and marshals, as well as the protestors themselves, were placed in serious danger as a result.

“The prosecution say that these defendants committed a criminal act of public nuisance,” Jones said. “As events unfolded, the F1 Grand Prix had started and it was under a red flag after a serious accident had occurred at the very start.

“Each of these defendants were present at Silverstone and they were intent on causing a disruption to the race. It is not in dispute that five of the defendants in this case – all of them save for David Baldwin – made it on to the race track and they did not have permission to be there.

“There is no dispute as to that, and they sat down in front of the ongoing cars – F1 motor racing cars. They will inevitably say that this was done as an act of protest and in order to bring publicity to the cause and demand they make – of no new oil and gas licences.”

“You will then see two F1 racing cars driving past the protesters… while five of the defendants were on the track. You will see marshals having to run on to the track and drag the protesters off to the side.

“The prosecution say that there was clearly an immediate risk of serious harm being caused. Plainly they could have been struck by fast-moving vehicles with obvious severe consequences. We say that their actions also caused risk to the drivers themselves and the marshals.”