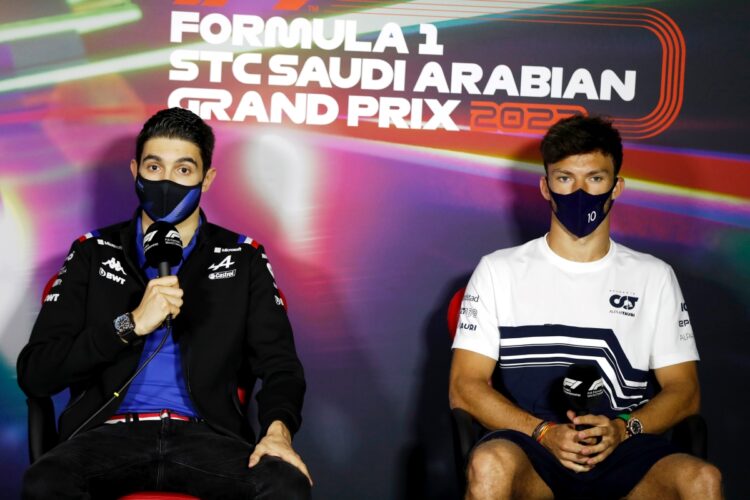 Alpine has been given a warning about the prospect of things potentially ending up toxic between its new driver duo for 2023 by ex-Formula 1 driver Romain Grosjean.

Alpine has signed Pierre Gasly for the upcoming campaign alongside Esteban Ocon, with Fernando Alonso departing to Aston Martin.

As one of six constructors to have shaken up at least half of its driver roster for the second year of the current technical regulations in place, Alpine’s change is arguably going to be the one that has the most fascinating dynamic to watch unfold over the course of the season.

They may be partnering up with each other in F1 for the first time, but Gasly and Ocon retain a complicated history relating back to an incident from their karting days.

Although their relationship has taken a turn for the better in recent times, with the pair spotted recently attending an NBA game alongside Ferrari’s Charles Leclerc, the high-intensity stakes involved, with both drivers desperate to beat the other, could lead to that childhood rivalry igniting on a more explosive scale at Alpine’s expense.

Therefore, Grosjean, who made 83 outings for the Enstone outfit across two spells, believes that the previous tensions between them could soar considerably amid the likelihood of a heated battle for supremacy developing within the team.

Speaking on his YouTube channel, Grosjean stated: “It can go bad, I’m not going to lie to you.

“Alpine is going to have to keep an eye on the relationship between the two of them. If it starts to be an ego fight to be the best French driver on the grid in the only French team, things can go bad.”

Being placed into such uncomfortable territory whereby the utilisation of team orders becomes a necessity wouldn’t be a first for the current Alpine team principal, Otmar Szafnauer.

Despite only moving into the role a year ago, the former Aston Martin boss had to issue strict instructions to Alonso and Ocon ahead of the 2022 Brazilian Grand Prix race after the pair had come to blows during the Saturday sprint race.

Ocon had been slammed by Alonso beforehand for what he perceived to be dubious racing etiquette, and the one-time race winner has also been embroiled in intra-team controversies in the past with other team-mates such as Sergio Perez while the two were at Force India.

Despite his reservations, Grosjean holds out a remnant of hope that his two fellow countrymen can continue to put their past differences aside and get along for the good of the team when the racing gets underway, as Alpine seek to solidify their fourth spot in the standings from 2022.

“But it can go really well, too.

“They are two guys who were not best friends when they were young, but they have matured a lot,” Grosjean argued.

“They both have a Formula 1 win and if they fit well together and work well together, it can be a very nice and fun success story for a brand like Alpine.

Gasly and Ocon will both be present as Alpine launch their 2023 challenger, the A523, on February 16 in London.