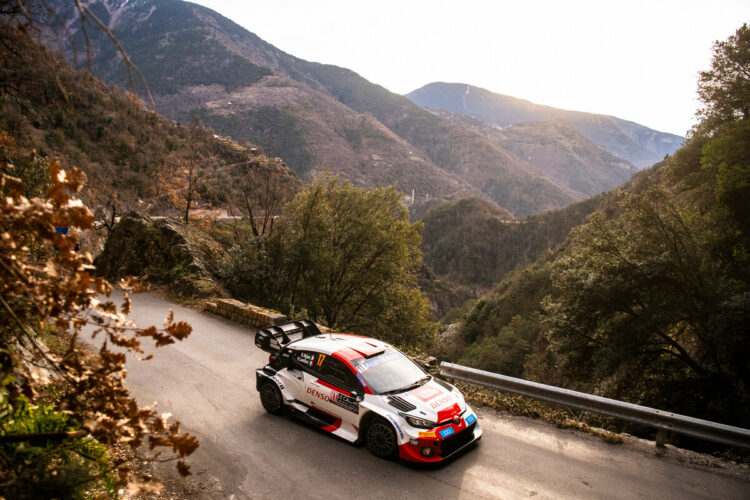 Sebastien Ogier has finished day two of Rallye Monte-Carlo with a 36s advantage over 2022 champion, Kalle Rovanpera. Rovanperä is closely followed by Thierry Neuville as the crews’ head into Saturday.

Ogier is running a part-time campaign but is also going for his ninth victory at the rally and is going about it in the best way possible. Carrying his impeccable form form Thursday night, the Toyota driver’s pace was relentless as he increased his lead over his rivals.

“I am very satisfied,” said Ogier “Obviously the risk of punctures was higher, so I took things a bit more easy, I’m just happy to bring home the car tonight.”

Rovanperä managed to leapfrog Neuville into second place during the afternoon loop, but this was also at the expense of Elfyn Evans. Evans was running second in the morning but suffered a puncture on the right rear of his car leaving his challenge for the win in tatters.

Evans did pick up a stage win during his recovery drive, but the time loss meant that he now sits fifth place, 1min 02.3s behind his French teammate. He also now trails Ott Tänak who was still searching for the sweet spot in his new for 2023 ride.

Tänak provided a boost to the M-Sport team as his team-mate, Pierre-Louis Loubet, had to complete over half of the day with no power steering. Due to their not being a mid-day service, Loubet had to soldier on but lost a massive chunk of time and out of the running for a good finish.

Rounding out the top six was Dani Sordo, who felt that the risks he was taking in his Hyundai didn’t match up with the times he was getting. Takamoto Katsuta enjoyed a more trouble-free run compared to Thursday night and finished the day ahead of Esapekka Lappi who was struggling with his car like Sordo.