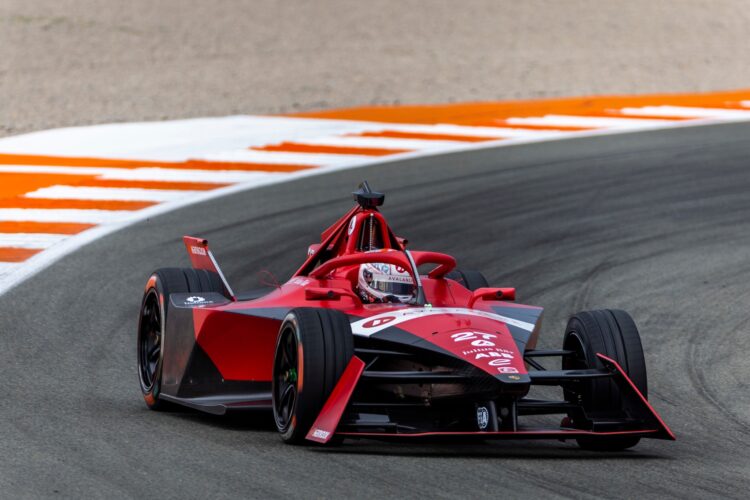 Jake Dennis put on a dominant display to take the first win of the Gen3 era.

The Briton was joined on the podium by Pascal Wehrlein in second and polesitter Lucas DiGrassi in third.

It was action from lap one with Frijns hitting the rear of Norman Nato, the Dutchman damaging his suspension in the process and breaking his wrist. The incident also forced Nato to retire.

The Safety Car neutralised the action, with teams already their energy strategy for the rest of the race would be affected.

Action resumed momentarily on lap six before Sam Bird pulled over at turn two due to a mechanical failure as he exited the Peraltada.

Di Grassi opted to go early on both of his Safety Car restarts, managing to fend off the threats from the drivers behind him. Jake Dennis took the lead on lap 12, making a lunge on DiGrassi through the hairpin, capitalising on a mistake made by the Brazilian.

There was heartbreak for NIO 333 with Dan Ticktum receiving a drive-through penalty for overconsumption caused by a power spike in his car, dropping him to the back of the grid.

Andretti opted to go for Attack Mode early, aiming to build the gap to Di Grassi behind.

But Edoardo Mortara made contact with the wall bringing out the Safety Car, and closing the over three-second gap Dennis had built out front.

On a different attack mode strategy to others around him, Pascal Wehrlein capitalised on those going through the activation loop, using his extra power to get the move done.

It went from bad to worse for Ticktum at the back of the field, picking up a 10-second time penalty for leaving the track and gaining an advantage.

Last year’s race winner Wehrlein continued his charge, getting ahead of Di Grassi as he struggled to keep up with those around him, overconsuming energy along the way.

While Dennis continued making strides out front, the fight for the final two podium places was ramping up with Sebastian Buemi and Antonio Felix da Costa joining the fight.

Five additional laps were added onto the end of the race due to the safety car periods as Dennis looked to cruise his Andretti machine comfortably home for the first win of the Gen3 era.

In an attempt to recoup some of the energy he had overspent, Di Grassi backed the pack up behind him leaving those behind him scrapping at every turn.

The added laps saw Rene Rast in the McLaren collide with Mahindra’s Oliver Rowland and pull over to the side of the track bringing out yellow flags in the area.

Dennis was driving his own race out in front, on the final lap having built a seven-second gap to the cars behind.

While it was peaceful up front the drama continued behind with Wehrlein making it up to second and Di Grassi dropping down to third, trying to fight off rookie Hughes behind.

Hughes found himself being overtaken by Andre Lotterer in the final moments of the race – nevertheless, it was a strong showing from the Briton in his maiden Formula E race.

With clean air ahead and behind, Dennis also set the fastest lap of the race, getting the additional points that come with it. Dennis leads the championship standing in Formula E for the first time in his career.