Formula 1 fans will be closer to the on-track action going forward at the Silverstone Circuit following the relocation of a section of catch fencing.

Along the Wellington Straight, which joins Turns 5 and 6, the fence has been moved forward by 15 metres.

A total length of 248 m of fencing has been relocated, allowing fans to see the cars even closer than before, all the while remaining safe behind the barrier.

The fencing is being supplied by Geobrugg, with work expected to be completed by Christmas and ahead of the 2023 season.

“With the speed of the straight and the new safety aspects of Formula 1, it was the right time to move to the Geobrugg system. We want to make sure we’re giving the fans the best experience and the best views.”

The fencing in question allow for a quick and simple installation process – however they are subject to strict FIA safety tests.

These tests include catching a 780kg sphere fired at 60 kph, as well as a full-size car impacting at a 20-degree angle.

The new fence design was homologated by the FIA earlier this year, and it is in use at all Grade 1 circuits.

The steel posts that are part of the design used to be separated by four metres – however that has been extended to six metres in 2022, which means better views of the track for attending fans, all the while retaining the mandated strength outlined by the FIA.

Jochen Braunwarth, Geobrugg’s Director of Motorsport Solutions, added: “We’re excited to be part of the redevelopment plans at Silverstone.

“By bringing in our mobile debris fences, we can safely give spectators at the Wellington Straight a fantastic view of the track.” 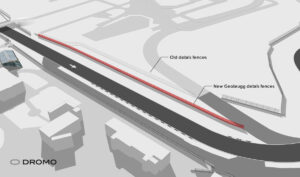