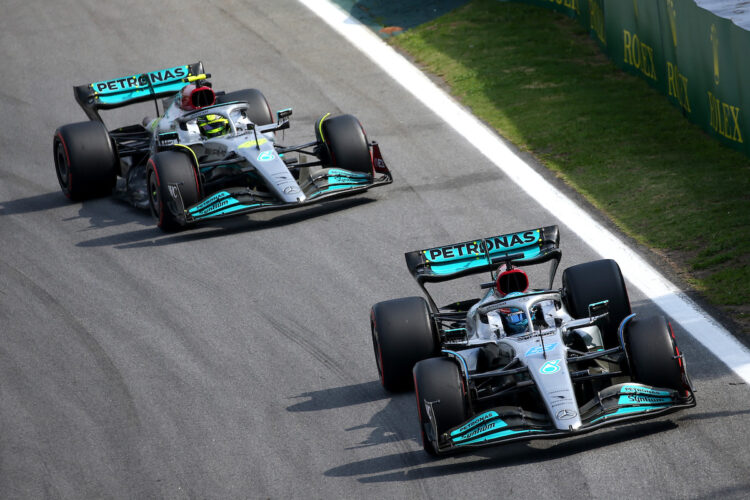 The first form guide for the 2023 Formula 1 season is still a long way off, but Mercedes will already be looking to place high on predictions lists and escape the ‘No Man’s Land’ area it found itself in throughout much of the 2022 campaign.

Many didn’t believe Mercedes at pre-season testing when it warned everyone that it would be racing off the pace to start the season. It was a message it had delivered regularly in the past before dominating en route to championship success.

The eye-catching aerodynamic concept that it unleashed at testing amazed the paddock and given the engineering prowess of the Mercedes camp, it was expected that the Brackley-based squad had once again found an area to exploit, allowing it to get a head-start on the competition for the commencement of F1’s new era under fresh technical regulations.

But it proved not to be, and from the off, it was unable to compete for pole positions and race wins.

After eliminating the porpoising problem following the opening handful of rounds, it slowly improved its form – but it very rapidly became evident that title success wouldn’t greet it in 2022.

Having already witnessed Mercedes school the F1 field in all areas from raw pace to reliability to strategy, there was a sense of oddity to see it so down on form. As it improved, so did its rivals, and it took 21 grand prix for it to overcome the winless drought that stretched back to Saudi Arabia in 2021.

But no sooner was it celebrating its first win in almost 12 months in Sao Paulo, and it was languishing again behind the top positions as its Abu Dhabi form drew curtains over any momentum.

The W13 car has been inconsistently fast, a frustrating situation for any team to be in as it renders creating expectations for a race weekend useless.

“I think first of all, we always knew that we need to be prude and not set our expectations on the Brazil result,” said Mercedes team boss Toto Wolff. “I think the circuit perfectly suited our car and everything ran very, very smoothly. In Abu Dhabi, in our ‘Table of Doom’, it was one of our worst tracks.

“Not catastrophic, like the high-speed tracks, but still not ideal. We’ve seen that today, we’re just way too draggy for a good qualifying time. We’re losing six-tenths on the straights. It’s just not easily solved by reducing the rear wing.  In a way, it’s good that there is correlation between our simulation and our result, that’s the one positive I see.” 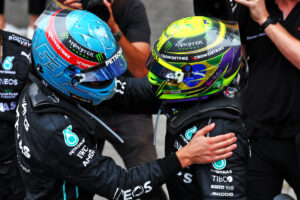 Having spent so much of the year attempting to right their wrongs, it faces a disheartening reality next year if it enters with a car that’s off the pace, given that it has been focusing on 2023 development for some time now.

Perhaps even more abnormal than Mercedes’ slump was Lewis Hamilton’s winless season. Having achieved a race victory every year since his 2007 rookie campaign, it appeared to be a record that Hamilton would take to retirement, given how long he has been competing at the front of the field.

But Mercedes’ best opportunities never went his way. In Brazil, where his best chance was presented, he was unable to overcome Russell concrete defence. The loss of the record won’t deter the seven-time World Champion, who despite being frustrated this year hasn’t stopped commending the Mercedes team on its efforts for 2022 and beyond.

Mercedes faces a sizeable task of overhauling the gap to Red Bull over the winter break, a mission that is perhaps softened by the fact that the reigning champions have reduced aerodynamic testing due to finishing atop the standings, as well as being penalised for their cost cap breach.

Mercedes has travelled a long way from its start-of-season woes, and has set its sights on getting a grip on stability that will provide it with the means to develop accordingly.

“I think we much better understand what the problems were [at the start of 2022], we’ve been peeling onion layer after onion layer off discovering more issues and more problems,” Wolff said. “But I think we’ve come to the point where we understand pretty well why the car is not performing. Like I said, the correlation is there for some tracks.

“It’s all in the fine details of how can we make the car work aerodynamically, how can we improve the ride height and make it more stable as a basis. It’s multiple factors that contribute to a car that is simply just not good enough.

“If we are able to sort that out over the winter, at least we can provide a stable platform to the drivers and we can develop it from there.”

But Mercedes is a winning team – its setup from 2014 to 2021 arguably ranks as the greatest F1 constructor of all time. Its place on the grid is anywhere but the top, and it will be determined to prove that once more in 2023.

This opinion article originally appeared in issue 495 of our weekly digital motorsport magazine, Motorsport Monday. Completely free to read with no sign-up necessary, Motorsport Monday is published every Monday morning and is packed full of motorsport content. Check out the latest issue here.