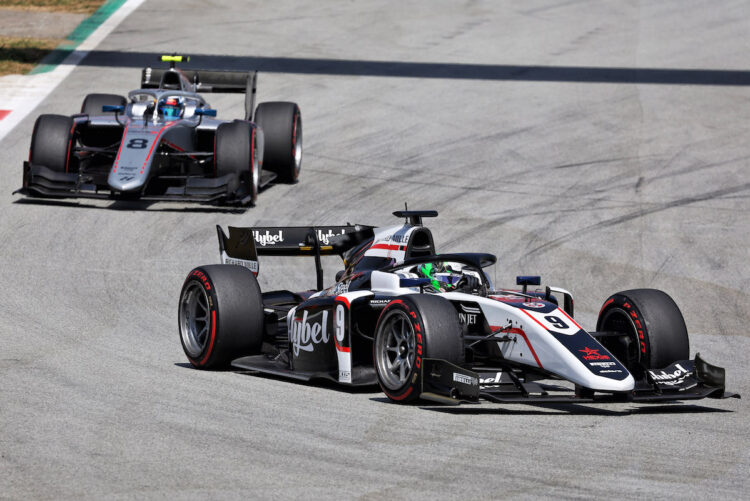 Formula 2 is aiming to introduce a number of elements from the current generation Formula 1 car to its new-for-2024 challenger.

F2 has not yet finalised its new car for the 2024 campaign, with 2022 marking the fifth successive season that the series has used the Dallara F2 2018.

One of the key elements that will be introduced to the new car in 2024 is a safety boost, with CEO Bruno Michel admitting that the current F2-spec machine is in need of an upgrade.

“We used to develop one car every three years and for economic reasons, we’ve developed this one for six years,” he told select media, including Motorsport Week.

“It’s a quite dated car. What are you expecting from a car at F2 level? Number one – a car that is meeting the safety standards that the FIA is developing.

“That’s something that’s going to be different in the new car because the safety devices that the FIA was asking for six years ago are not the same as the ones we’re having now.”

F1 introduced a new car for the 2022 season, implementing a series of aerodynamic changes while retaining the same power unit regulations.

Michel says that F2 wants to ensure that the 2024 car “looks more like an F1 car”, with the series working with the FIA to see if any elements can be transferred from F1 to the feeder series.

“You want a car that prepares drivers for F1. If there are new things that F1 is putting together on their car and making a change, of course you need to try and see if you can adapt them on the F2 car,” he said.

“You [also] want a car that will provide great racing. That’s also the DNA of our categories and I must say on that we’ve done quite well but we can always improve ourselves.

“We’ve been working, for the 2024 car, with the aerodynamicists of the FIA who have been working on the F1 car to see if there are things we can take on the findings they made, especially how much downforce you lose when you follow another car, these kind of things.

“We look at what they’re doing, knowing that our races have always been quite spectacular and our cars are overtaking quite well and are capable of following each other. But we can always see if we can improve it.”

But Michel says that he is remaining cautious over the danger of rising costs for the teams on the grid.

“What is most important, we have to make a car that is not going to cost a fortune. That’s the big difficulty that we have because everything I said before [means] additional costs.

“We need on the other hand to make sure that we don’t kill the teams because they will have to buy a car that is worth much, much more money than what they were doing in the past.

“We need to be very careful about that – not only the car itself, but all the spare parts that they will have to buy during the life of the car.

“We will need to make sure that we are making things simple. We need to be sure that when they have an issue they can change a little part of the car and not a big one.

“We need to be sure the car can be exploited by a limited number of people, because we have only 12 operating people in F2 [per team].

“That’s why when you’re talking about power steering and other things, we need to be sure that we can continue to do that at the same level of expense that we have now.

“Because in the end, who’s going to pay for that? It’s the drivers so that’s something we need to be careful [of].”