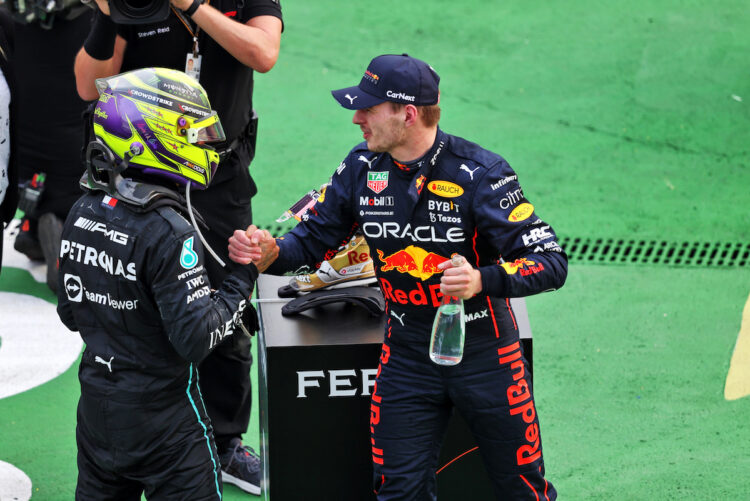 Lewis Hamilton has likened Red Bull’s off-track drama in 2022 to a segment of a “Kardashian show”.

Despite dominating the 2022 campaign en route to the Drivers’ and Constructors’ Championships, the Milton Keynes-based squad was involved in a number of uncomfortable situations.

It emerged in the second half of the season that it had breached Formula 1’s cost cap of $145 million that was implemented last year. As a result, it was fined $7m and issued reduced testing time for the 2023 season.

Furthermore, at the Brazilian Grand Prix, Max Verstappen and Sergio Perez were involved in an incident that saw Verstappen defy team orders.

Verstappen failed to let Perez through for position amid the Mexican driver’s battle with Charles Leclerc for second in the Drivers’ standings.

Speaking to Channel 4 ahead of the final round of the year in Abu Dhabi last month, he was questioned about Red Bull’s 2022 campaign.

“I mean it feels like a bit of a Kardashian show happening here,” he said. “It’s pretty hilarious, some of the stuff that I’ve heard over the past few days has been so entertaining.”

When pushed for an example, Hamilton appeared to highlight a deleted social media comment from Verstappen’s mother in which she accused Perez of cheating on his wife.

“Just some pretty interesting stuff going on. I’m sure it’ll all be on Netflix – it’s going to be great.

“But what a mess in that space. It’s been very interesting to see it unfold over the last 12 months.”