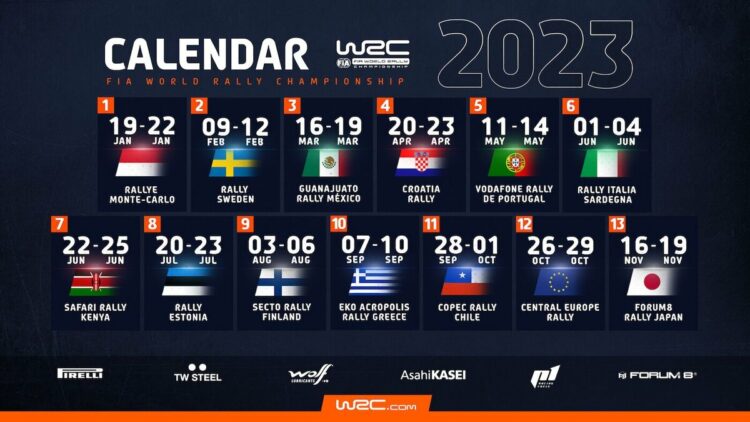 The 2023 World Rally Championship has been revealed with a 13-round season featuring some returning rounds as well as a new concept.

For the first time, the WRC season will include a rally that features three countries. Austria, Germany and the Czech Republic will play host to the Central European Rally from 26-29 October. The rally’s base will be in Germany at the city of Passau.

The season will commence at the traditional start point of Monte Carlo (19-22 January) before moving on to the snow and ice of Sweden (9-12 February) with the series returning to Umeå after its 2022 debut. The championship then moves to the Rally Guanjuato México (16-19 March) for its first long haul rally before moving back to Europe to battle on the first all-asphalt rally in Croatia (20-23 April).

Heading into the final stretch, the series heads to South America for the return of the Copec Rally Chile (28-1 October) for the first time since 2019 before returning to Europe for the new Central Europe Rally. The FORUM8 Rally Japan (16-19 November) plays host once again to the finale of the season.

WRC Promoter Managing Director Jona Siebel said: “We are incredibly happy to be returning to North and South America, we have maintained a dialogue with the Mexican and Chilean organisers throughout the Covid pandemic and we are confident this is now the right time for our return,” He also added “Additionally, with an exciting new concept added to the mix, the WRC is well-placed to reach more fans than ever before.”