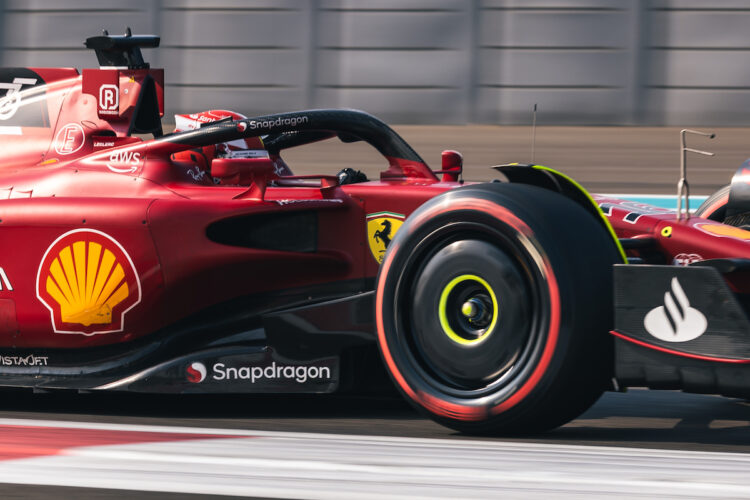 Following the opening half of post-season Formula 1 testing at the Yas Marina Circuit, Ferrari’s Charles Leclerc currently heads the timesheets.

The Monegasque driver is carrying out testing duties for Pirelli, while the second Ferrari is occupied by the team’s reserve driver, Robert Shwartzman.

Shwartzman is second in the timesheets, seven-tenths down on Leclerc.

The session doesn’t feature a lunch break, running straight through from 9am to 6pm local time.

A number of 2023 F1 drivers received their first laps at their new team, and are headed by Aston Martin’s Fernando Alonso.

The Spaniard was third fastest at the halfway point, while his replacement at Alpine, Pierre Gasly was fifth. Red Bull’s Sergio Perez was lodged between the two.

Perez has also tallied the highest number of laps so far, with 88 to his name.

Nyck de Vries was 16th in the morning, ahead of McLaren’s Oscar Piastri and Haas’ Nico Hulkenberg in 17th and 18th respectively.

Both Piastri and Hulkenberg had technical issues during the session, with both causing red flags due to on-track stoppages.

Logan Sargeant, whose F1 seat at Williams was formally confirmed on Monday, was 19th.

A third red flag was thrown in the final moments of the first half of the day due to debris on the track between Turns 3 and 4.

Valtteri Bottas and Lando Norris were sixth and seventh in the session respectively.

Felipe Drugovich, who will act as Aston Martin’s reserve driver next year, was eighth for the team.