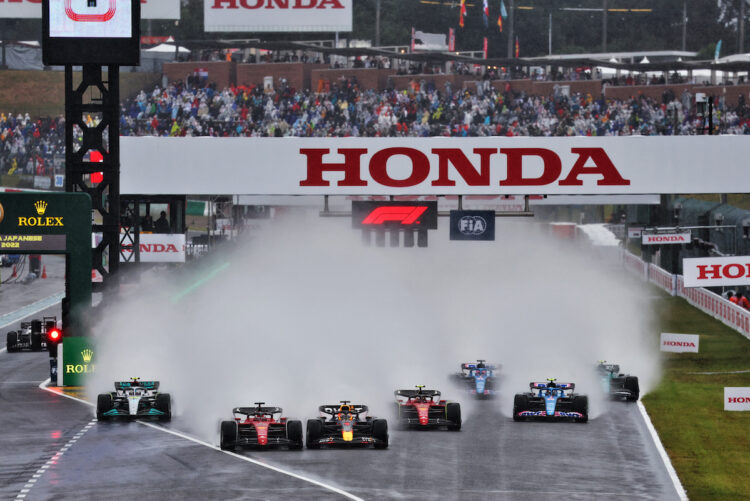 Formula 1 says that it is carrying out studies on a standard bodywork kit to reduce how much spray the current cars kick up in wet weather.

F1’s wet weather tyres are extremely been efficient at clearing water on the track surface – however drivers have complained at times that it results in heavily reduced visibility.

It was most recently an issue at the Japanese Grand Prix last month, which was red-flagged early on due to difficult weather conditions.

Following a recent F1 Commission meeting, the FIA says that the drivers have insisted that the current generation of cars dampen visibility in wet conditions, which has led it to find solutions.

One possible answer that the FIA is looking into is establishing a standard bodywork kit that aims to suppress the tyre spray when running in wet conditions by use of minimal bodywork over the wheels.

It has also looked into ensuring that the design wouldn’t hinder pit stops, and if they can be fitted to the cars only during extreme wet conditions.

The FIA also says that additional lights on cars could be a prospect going forward to improve visibility.

It says that “preliminary work and an initial concept were presented to the Commission, and the FIA will continue to work to refine the proposals, with further updates anticipated in 2023”.

Other matters were discussed at the recent meeting, including the application of grid penalties for an overuse of power unit parts.

For the last number of years, many teams have overused the yearly quota by several components, resulting in multiple grid penalties throughout the year.

It was agreed between teams that “the current system is not a strong enough deterrent to teams to make strategic Power Unit changes, and encourages the change of more elements than needed once a driver has accumulated more than a certain level of penalty”.

While no decision regarding the future of power unit penalties has been agreed, hte matter will continue to be discussed.

There will also be a change to DRS activation at the six Sprint sessions in 2023 – drivers will be allowed to activate DRS one lap earlier than normal at the start of the race or after a Safety Car restart.

Should the method prove to be successful, it may be introduced at all races in 2024.

The FIA also says that it has delayed finalising a tyre ban for 2024 until July of next year following feedback from teams regarding the proposed rule.