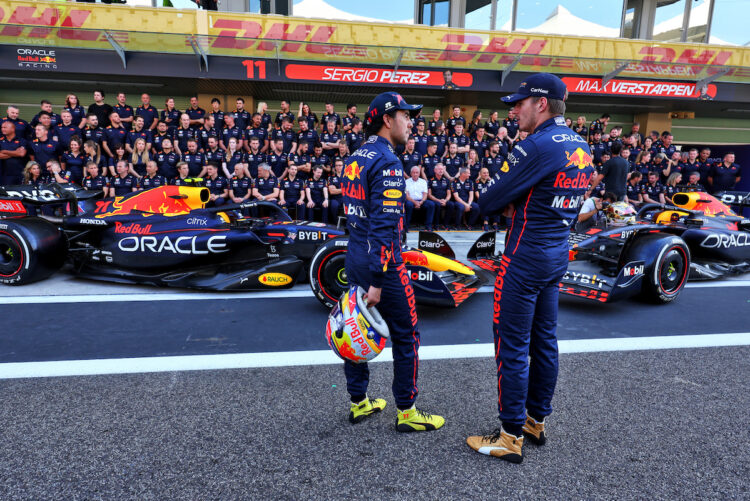 Max Verstappen has aimed criticism at the media following last weekend’s Brazilian Grand Prix, where he was involved in a controversial scenario with team-mate Sergio Perez.

Verstappen was instructed on the final lap of the race to let Perez through for position to aid the Mexican’s fight against Charles Leclerc in the Drivers’ Championship.

However, Verstappen stayed in front at the chequered flag and was heavily criticised after the race for failing to cooperate with the team order.

Red Bull issued a statement on Thursday, hitting out at the social media comments that were directed at the team following the race.

Verstappen confirmed that the matter in Brazil was a response to “something that happened earlier in the season”.

However, he says he is displeased with how he was portrayed in the media after the race weekend, stating both he and his family received abuse.

“We keep it between the team and myself. They [the media] don’t know the real story, so you don’t need to write the story,” Verstappen said.

“I’m just a bit fed up with all this bullshit just going around all the time. As soon as there’s something negative, it needs to be highlighted.

“It’s pretty sickening to be honest, being part of all that. At the end of the day I haven’t done anything wrong,  people just misunderstood what was going on.

“It’s just incredibly disappointing that, without knowing the full facts, that people write so many bad things straight away.

“I don’t know why that is but at the end of the day you contribute to the problems social media has, by writing these things. The team knows how I work with them and I’ve always been good to the team.”

Verstappen added that Red Bull should’ve had a conversation regarding the topic much earlier in the season.

“I already explained that in Mexico and the team understood that and agreed,” he said. “We went to Brazil, I just thought we would race, try to get the best possible result.

“We had a bit of a miscommunication on Saturday. Nothing had been said to me about a potential swap. It was only on the last lap they said something on the radio.

“They should have known my response already after what I said the week before.

After that race, we had some good discussions, we put everything on the table and everything has been solved. In hindsight we should have had that conversation earlier because I’ve never been a bad team-mate.

“I have always been very helpful. The team knows that – I always put the team up front because at the end of the day it is a team effort.”