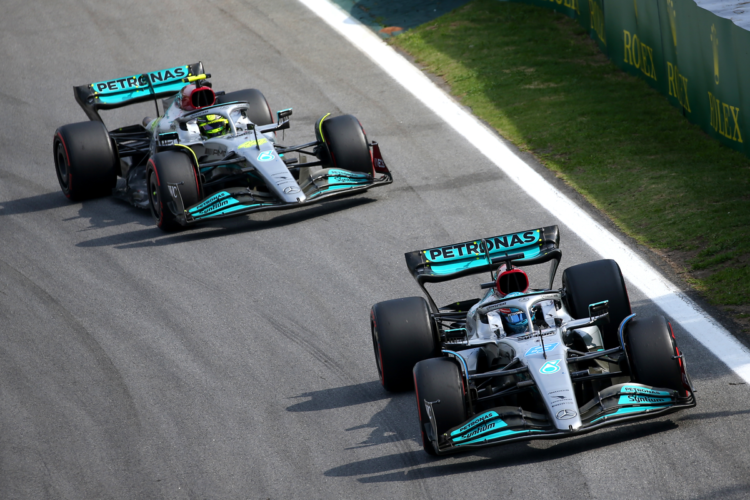 George Russell spoke of how tough it was to hold off a charging seven-time world champion in his Mercedes team-mate Lewis Hamilton en route to his maiden Formula 1 win in Sao Paulo.

While the Mercedes pair did run as one-two for the first several laps, they became separated after Hamilton’s turn-one incident with Max Verstappen which saw him drop down the order.

However, in his first new home race as a newly announced honorary citizen of Brazil, Hamilton carved his way through the field to second place behind Russell before a late Safety Car was deployed.

Speaking to media after the race, Russell talked about what was going through his head in those moments: “I knew how quick Lewis was and when that Safety Car came out I thought, ‘this is going to be very tricky now’.

“I put together a string of good laps with very few mistakes and the pressure Lewis was putting me under was immense, so just proud of the whole team.

“This progress we’ve made since the start of the year is just unbelievable and what a boost it will give us into next season.”

It was the second Safety Car of the race with Russell also successfully defending the first from Hamilton who was under pressure from Verstappen.

The young Brit went on to lead all but four of the 71 laps of the Interlagos circuit as Hamilton did briefly take over after Russell’s first pit stop.

“You just have to go through the process and treat it as if it’s any other,” the 24-year-old continued.

“There was a moment in the race where I was looking in my mirrors a lot and I saw Lewis there, but I realised that I just need to look forward now.

“The only way I’m going to win this race is by looking ahead and driving as fast as I can, making no mistakes.”