The Glickenhaus Hypercar programme in the FIA World Endurance Championship may be in doubt next year, according to an Instragram post by driver Ryan Briscoe.

Briscoe was at Sebring, driving the car he raced this year in the WEC. He was working with the car’s owner, Jason McCarthy. Although McCarthy owns the car, it is operated and run by the Glickenhaus team, which itself is run by Podium Advanced Technologies, with support from famed sportscar team Joest Racing, who formerly ran Audi’s programme for many years.

Briscoe said in his Instagram post: “Felt awesome to be turning laps in this beast over the weekend! It felt really strong and will be a shame for it to not compete next year! Lucky for the others I suppose 😏”.

It’s unclear whether the Australian means just the car he drove — #709 — likely won’t compete in WEC next year, or the Glickenhaus programme as a whole, with the car owned by the team, the #708. The #709 only competed at Le Mans in 2022, with the #708 racing at Sebring, Spa, Le Mans, and Monza. Either way, it casts considerable doubt on the fan favourite team, led by American Jim Glickenhaus, seldom seen without his cowboy hat.

Glickenhaus last raced in WEC at Monza in July, with the #708 Glickenhaus 007 LMH, where they were looking good for a maiden win until the car’s turbo failed mid-way into the 6 hour race. It didn’t race at Fuji, and while Jim Glickenhaus left the door open to race at Bahrain when he spoke to MotorsportWeek.com, the team elected not to in the end.

If the team does decide to race in WEC next year, it will go up against increased competition from Ferrari, Porsche and Cadillac, in addition to Toyota and Peugeot. MotorsportWeek.com has reached out to the team and will update if or when we hear back. 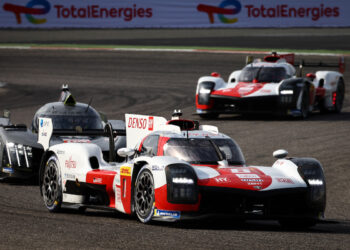