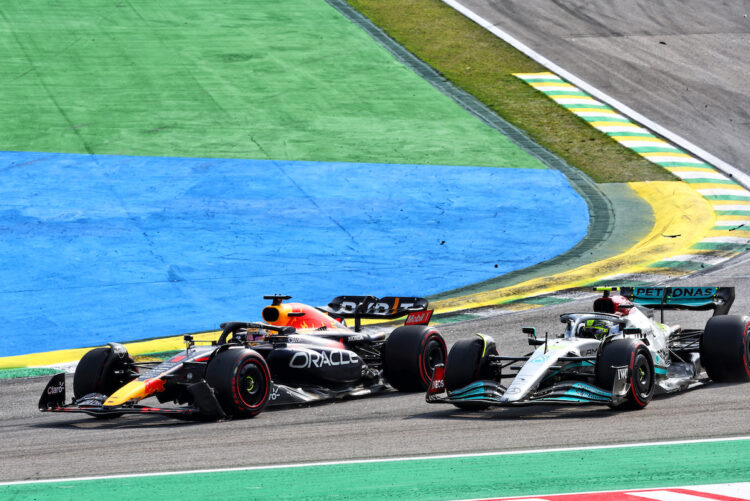 Lewis Hamilton and Max Verstappen came together once again on the opening stages of the Sao Paulo Grand Prix on Sunday, which proved costly for both drivers.

Verstappen was forced to pit for a new front wing after the collision, while Hamilton had to recover a number of positions during the race, having dropped down the order.

“I’ve got to say huge congratulations to George,” Hamilton said after the race. “What an amazing drive he did today.

“He did amazing qualifying yesterday. So he truly deserves it. To my team, so proud of everyone back at the factory and here.

“This is an incredible result. We’ve worked so hard through this year to get a win and so this is hugely deserved for everybody, so a big, big thank you.”

Hamilton and Verstappen made contact on a number of occasions in 2021 as they contested for the F1 title.

The duo haven’t had many wheel-to-wheel battles this year with Mercedes often competing off the front-running pace, while Verstappen has dominated.

When asked about his reaction to the clash with Verstappen on the exit of Turn 2, Hamilton said: “What can I say, you know how it is with Max, so…”

Verstappen ended the race in sixth place under controversial circumstances, as he defied a team order and stayed in front of team-mate Sergio Perez.

Giving his own opinion on the incident with Hamilton, Verstappen told Sky F1 that Hamilton simply didn’t offer him enough space on the inside of the corner.

“I went around the outside and I knew he was not going to leave space. I just went for it,” he said.

“He didn’t leave me space so I knew we were going to get together. It cost him the race win, for me it gave me five seconds.

“It wouldn’t have mattered for my race because we were just way to slow. It’s just a shame, I thought we could race quite well together. But clearly the intention was not there to race.”