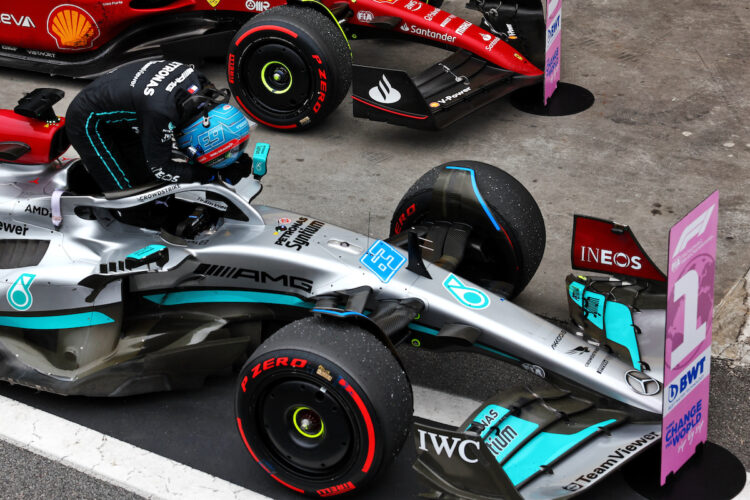 Mercedes has revealed that George Russell’s car in Brazil crossed the line by the “skin of its teeth”, as it was dealing with a water leak throughout the race.

Russell controlled the Sao Paulo Grand Prix on Sunday to take his maiden Formula 1 victory ahead of team-mate Lewis Hamilton.

He also ended Mercedes’ winless drought, securing its first win of the 2022 campaign.

Russell came under pressure in the final laps by Hamilton, but held on following a Safety Car restart to take the chequered flag.

However, speaking after the race, Mercedes team boss Toto Wolff admitted that there was concern inside the organisation that Russell wouldn’t make it to the end.

“We had a water leak on the car throughout the race and it wasn’t clear whether we could actually make it to the end,” Wolff said.

A Mercedes spokesperson stated after the grand prix at Interlagos that Russell was kept in the dark over the problem.

“About half distance, we knew about it and George wasn’t informed,” the team said. “So he wasn’t aware.

“We were concerned at one point that we would be four or five laps from the finish and not making it but then it did by the skin of its teeth.”

Russell almost took his first F1 win at the 2020 Sakhir Grand Prix, when he stood in for Lewis Hamilton who tested positive for Covid-19.

However, a tyre mix-up at a pit stop and a late puncture denied him the chance to contend for the win, with Wolff suggesting that the victory in Brazil is extra special due to the Bahrain heartbreak in 2020.

“I don’t know if it’s redemption but I think he deserved to win in Bahrain and we let him down with the car,” he said.

“This victory makes us happy because he could’ve had one on the clock two years ago and he didn’t.”