Ricciardo explains his perspective of Magnussen F1 clash in Brazil 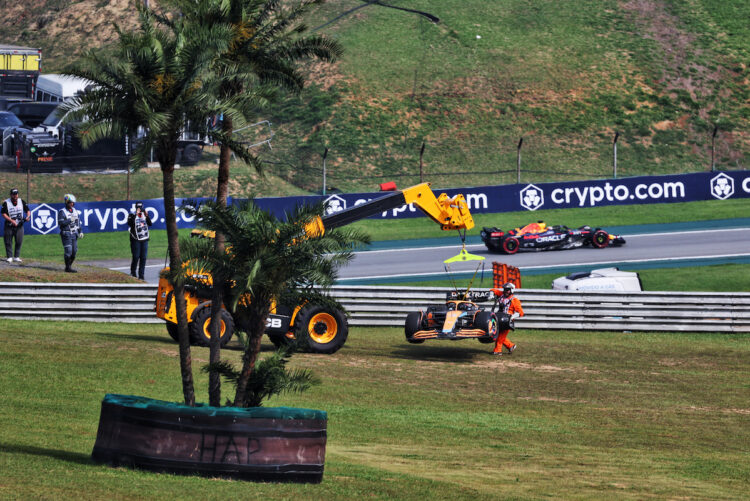 Daniel Ricciardo has described his perspective of the collision with Kevin Magnussen, after both drivers retired on the opening lap of the Sao Paulo Grand Prix.

The duo were battling in the mid-pack before Ricciardo touched the back of Magnussen’s Haas at Turn 8.

Magnussen was spun around, and as Ricciardo attempted to sneak past the Dane who was rolling backwards, he was collected which resulted in terminal damage for both competitors.

“I thought I was clear, but it’s so hard,” Ricciardo said of the secondary impact. “I remember him rolling back, I guess he’s trying to get out of the way of other cars.

“He wouldn’t have probably seen me or known I was there. But I thought I was clear. Once you get to a certain point, it’s blind. At some point, you hold on nad. hope you don’t get an impact.”

The incident was particularly painful for Magnussen, who was targeting points for Haas after scoring its maiden pole position on Friday.

Ricciardo was deemed at fault for the incident, and will serve a three-place grid penalty at the season-ending Abu Dhabi Grand Prix this weekend.

The Australian driver, who will depart McLaren following the upcoming race event at the Yas Marina Circuit, detailed how he ended up coming together with Magnussen.

“Lap one incidents, they’re brutal,” he said. “I don’t think there’s anything worse than a lap one incident, you obviously get so excited to go racing.

“The start was solid, I haven’t seen a replay yet but what I remember was I had a decent run through [Turns] 6 and 7, I remember cutting back to the inside for eight, I was kind of having a look but also trying to brake with a little bit of clean air.

“I remember in braking, Kevin was protecting the line and then I was trying to pull back in line and follow suit. I remember it bottling up a bit and I think at the apex, that’s where I gave him a little touch.

“To be honest, it didn’t feel like much but as soon as he started to slide, I was like ‘Oh…’. And then the second part, that’s where we made bigger contact.

“I don’t know if I could’ve braked harder, or more, or if it was just the way he squared up the corner and the angle. I’m not here to say it’s his fault or my fault, if it’s my fault of course I apologise.

“It’s more I’m sorry for both of us not being in the race, and for our teams. That’s the part that hurts the most. Lap one incidents, they’re certainly the worst.”