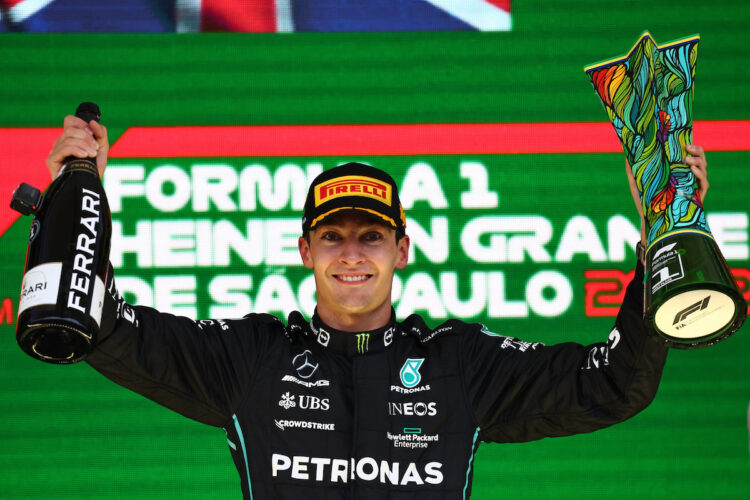 George Russell led almost the entirety of the Sao Paulo Grand Prix as he took his first-ever win in Formula 1, and Mercedes’ first of the 2022 season.

The 24-year-old started first after winning the sprint race on Saturday, while Lewis Hamilton secured a Mercedes one-two in second, before Carlos Sainz rounded out the podium places.

The Safety Car was deployed almost immediately when Daniel Ricciardo sent a late move on Kevin Magnussen into Turn Eight, wiping out the initial polesitter on the opening lap.

Things did not get much cleaner on the restart, as Max Verstappen initially pulled a stunning move on Hamilton around the outside of Turn One, before the pair made contact on the apex of Turn Two.

Seconds later, Lando Norris and Charles Leclerc made contact at Turn Six, sending the latter into the wall, but he was somehow able to continue.

Leclerc and Verstappen were forced to pit, while Hamilton was sent down to eighth in a crazy opening phase of the race.

The two-time champion was penalised by five seconds for his involvement in the Hamilton incident, before Norris was handed the same punishment for Leclerc’s spin.

Hamilton would recover to pass Pierre Gasly, Sebastian Vettel and Norris, before the Briton was passed by Vettel, who raced at Interlagos for the final time in his F1 career.

Hamilton pitted five laps after team-mate Russell, and he began his pursuit of Sainz. He passed Sergio Perez after Sainz made his second stop, restoring Mercedes’ one-two.

The seven-time champion was brought in to respond to Perez’s second stop, placing Sainz into second, and on Softs, Hamilton was in a strong position to pass Sainz for second.

A Virtual Safety Car emerged when Norris, who had been experiencing steering troubles after his contact with Leclerc, came to a halt, culminating a miserable day for McLaren.

Sainz recovered to third ahead of Leclerc, who completed a mighty recovery after his early collision with Norris.

Late shows from Verstappen and Fernando Alonso saw them finish fifth and sixth, respectively, ahead of Perez, who fell back on old tyres after the Safety Car period.

Sebastian Vettel finished 11th ahead of Pierre Gasly and Zhou Guanyu, before Mick Schumacher crossed the line 14thin a tricky weekend for the German. Gasly’s five-second penalty for speeding in the pit lane, however, demoted him to P14 behind the sole remaining Haas.

Alex Albon and Nicholas Latifi claimed 15th and 16th, as Yuki Tsunoda ended the race as the last classified runner in P17.

Mercedes closed the gap to Ferrari to 25 points in the battle for second in the Constructors’ Standings, while both Russell and Hamilton extended their advantage over Sainz in the drivers’ battle.

Leclerc and Perez, meanwhile, are level on points in the fight for second heading into the final round of the season next weekend in Abu Dhabi.