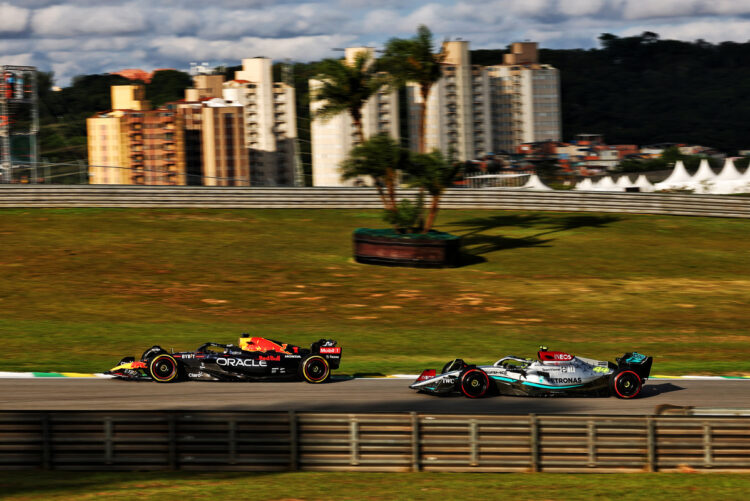 After losing out on a top-three finish in the Formula 1 Sao Paulo Sprint Race, Red Bull and Max Verstappen are hoping to make use of their extra set of soft tyres they will have over the rest of the grid in Sunday’s race.

Verstappen was joined by only Nicholas Latifi on the medium compound tyres as the rest of the grid opted to run the faster and less durable softs.

However, the call looked to have backfired on the Dutchman as the pace of the softer tyres ran superior over the mediums which looked to have lost durability in the final stages of the race.

Verstappen was passed by Russell on lap 15 after a collection of wheel-to-wheel battles in the laps leading up to it. Carlos Sainz and Lewis Hamilton were next to overtake the 2022 champion as he dropped down to fourth place.

“We felt that the soft was limited in range,” Horner told Sky Sports F1. “So, we took the decision to start on the medium to survive the first 12 laps and the second half of the race would become more comfortable.

“They survived the first half of the race and we ended up having the worst deg[redation] then softs. So, Mercedes had a really quick car today and we couldn’t hold them off.”

One of the storylines of the season has been Mercedes’ rise back to the front of the pack as it has looked ever more likely that they will grace the top step of the podium at least once this season.

The performance of the W13 this weekend will no doubt be a boost of confidence for the team and even having the pace to stick with and eventually pass Verstappen’s RB18 was very impressive.

“They have been heavily developing the car through the course of this season,” Horner continued. “We have seen significant steps throughout the year and they have been getting closer and closer.

“George did a great job then and the soft would have been better today. We take an extra set of soft in tomorrow. So, what we lost today, we could strategically gain back tomorrow.”