Mercedes: Russell’s F1 Sprint win is ‘all we hoped for’ 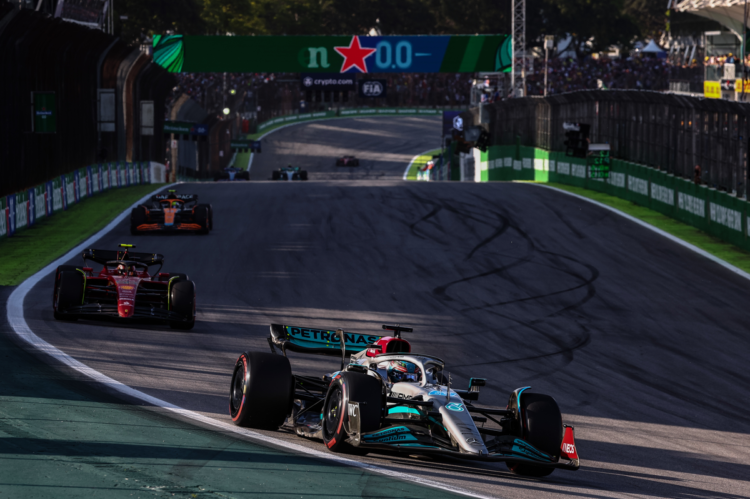 Mercedes F1 trackside engineering director Andrew Shovlin has expressed his delight with George Russell’s win in the Sao Paulo Sprint Race after coming from behind to beat Max Verstappen who dropped out of the top three.

The Dutchman took the lead from pole-sitter Kevin Magnussen early on in the race but failed to benefit from the longer tyre life of his medium compound Pirelli’s.

Verstappen and Russell engaged in a few laps of stunning wheel-to-wheel action around the Interlagos circuit before Russell finally got the better of him on the back straight.

Shovlin explained what Russell’s win meant to the team which Sky Sports F1 after the race: “It’s all that we could have possibly hoped for. To be quicker than Max there was a bit unexpected, to be honest.

“A lot of that was down to the medium tyre and a great recovery drive from Lewis. It’s been a while since we’ve had a front-row start so we’re looking forward to it.

“We know that George knows how to race, he’s very smart behind the wheel. It was nice today to give him a car where he can show what he can do right at the front.

“We know Max is a difficult guy to be up against, but it was a really impressive drive by him.”

Russell lead the grid to the chequered flag ahead of Ferrari’s Carlos Sainz and team-mate Lewis Hamilton who will start alongside Russell due to Sainz’s five-place penalty.

The effort is sure to help Mercedes’ efforts in the Constructors’ Championship with second place still up for the grabs for the German team.

“We looked like we had a bit of an edge over Ferrari today,” Shovlin continued.  “It’s gonna be a bit warmer tomorrow, which might change the picture a bit.

“We’ve obviously started from a pretty low bar early on in the season and it has been a lot of hard work to get here but certainly, the update we bought a couple of races ago does look to have brought us into contention.”