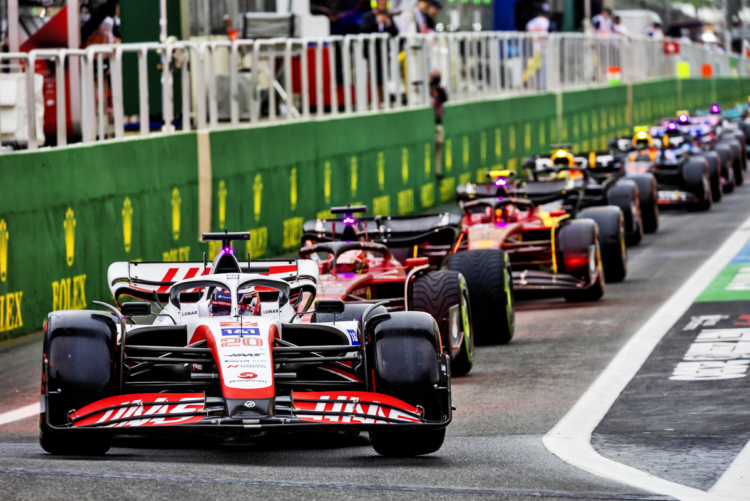 Kevin Magnussen (DEN) Haas VF-22 leads out of the pits at the start of the final third of qualifying - © Copyright: Batchelor / XPB Images

Haas team boss Guenther Steiner has expressed his delight with Kevin Magnussen and Haas’ maiden Formula 1 pole position at Interlagos, stating that the achievement had nothing to do with luck and instead the right call at the right time from the team.

The Danish driver, who is entering his 100th race with Haas F1 Team this weekend, beat Max Verstappen and George Russell to pole position in changing conditions and will start Saturday’s Sprint Race from the front of the grid.

Q1 started on intermediate tyres and dried as the session progressed. However, the looming threat of more rain was present throughout the entirety of the session.

Drivers exited the pit lane in Q3 on the slick tyres with the Haas driver at the front of the pack. After the first round of stops, Magnussen found himself on provisional pole position before Russell’s venture into a gravel trap brought out a red flag.

The rain finally began to fall, meaning no one would be able to topple Magnussen’s time which was set on a dry track.

“It was not luck, it was well deserved from the driver, from the team, being on the right tyres at the right time, Kevin putting a lap down when it was needed,” Steiner told Sky Sports F1 after the session.

“He was first out there, we can say ‘yeah, he has the advantage’, but the disadvantage, he had nobody to gauge with, he was on his own.

“So he put the lap down and it stuck, so it was basically when it rains soup, you need to have a spoon ready and he had the spoon ready today.

Steiner was later asked about Magnussen’s chances of keeping the rest of the grid behind in the 24-lap Sprint Race which will take place on Saturday afternoon.

“I think now you’re getting a little too optimistic! 24-laps to keep everybody behind will be difficult, but I’m happy with points,” the team boss answered.

“We don’t need to win the race. If we win it, I’m more than happy but it would be very unrealistic to think that but as long as we stay in the points, we are happy.”