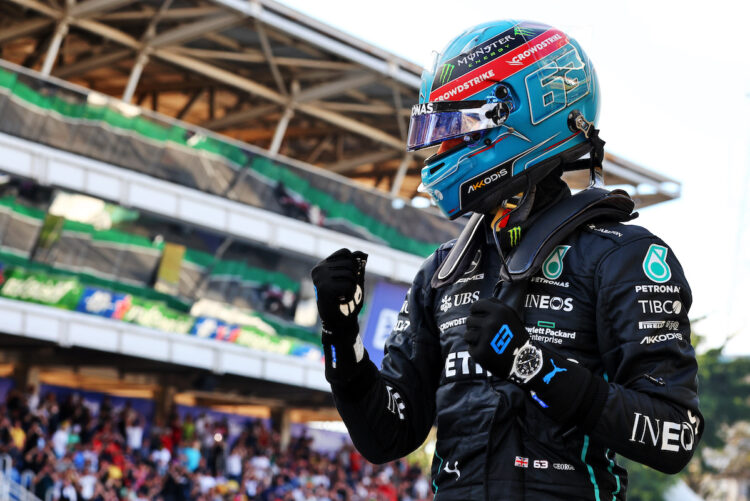 George Russell will start the Sao Paulo Grand Prix from the head of the field after winning Saturday’s F1 Sprint at Interlagos.

The Mercedes driver started the race from third on the grid, and moved ahead of pole-sitter Kevin Magnussen in the opening laps, who was also passed by Max Verstappen.

Russell set his sights on overtaking the Red Bull driver, and attacked the reigning World Champion on multiple occasions before passing him on lap 15.

Verstappen then fell into the clutches of his rivals behind, and sustained damage when Carlos Sainz moved in front at Turn 1.

The front left endplate of Verstappen’s car became detached from the car, which then allowed Lewis Hamilton to cruise through for third.

Hamilton chased down Sainz in the final laps, but couldn’t move in front of the Ferrari driver for third.

However, as Sainz will serve a five-place grid penalty for a new engine, Mercedes will start in first and second at the start of the grand prix.

Verstappen held on to fourth place, with team-mate Sergio Perez behind in fifth. The Mexican driver inquired to Red Bull about being handed Verstappen’s position amid his fight for second in the championship, but no team order was delivered.

Charles Leclerc was sixth for Ferrari, recovering from a disappointing qualifying session on Friday.

Lando Norris was seventh, having overtaken Magnussen in the final stages of the race. Magnussen, whose Haas car lacks pace comapred to those around him, took the final point on offer in the sprint.

Sebastian Vettel was ninth, but endured an intense battle with his team-mate Lance Stroll, who recieved a 10-second time penalty for pushing Vettel onto the grass on the run to Turn 5.

They weren’t the only team-mates who found trouble, as Alpine’s Fernando Alonso and Esteban Ocon collided twice on the opening lap, with the former pitting for a front wing change.

Pierre Gasly rounded out the top 10 for AlphaTauri, while Alex Albon was the race’s only retirement following an on-track stoppage at the mid-point of the race.