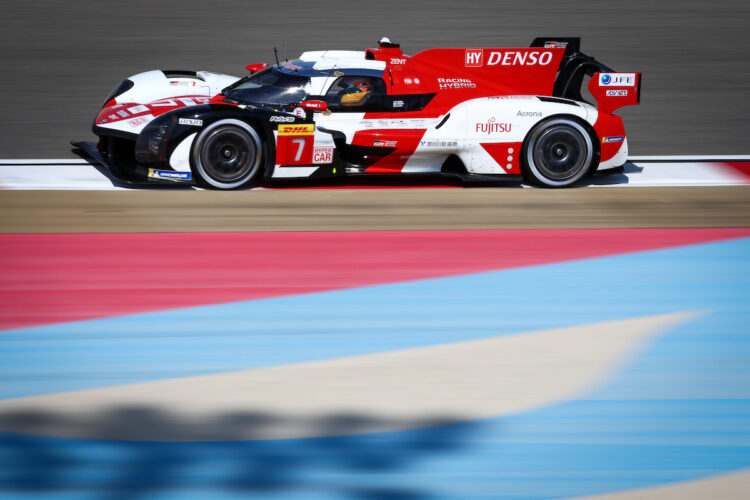 Toyota continue to lead the FIA World Endurance Championship’s 8 Hours of Bahrain with half the race still go, with the #36 Alpine A480 third, three laps down.

#7 Toyota GR010’s Mike Conway is 2.5 seconds to the good over his teammate Brendon Hartley, in the #8 Toyota. Hartley initially was leading Conway but let the Briton through under team orders, although he did so reluctantly. Hartley had previously complained of downshift issue, but this appears to have been fixed.

Nicolas Lapierre is third in the #36 Alpine A480, but the car is lacking straight line speed and so is struggling with traffic management compared to the Toyotas and Peugeots. If it finishes like this, the #8 Toyota drivers — Hartley, Sebastien Buemi and Ryo Hirakawa — the drivers’ championship.

Speaking of Peugeot, they are fourth and fifth having suffered some reliability woes, with both cars having stopped on track at least once through the four hours. Mikkel Jensen in the #93 Pdugeot 9X8 is fourth, with Loic Duval fifth in class in the sister #94, but is 10th overall on account of the car spending time in the garage after stopping on track just before the hour mark.

In GTE-Pro, Ferrari leads a 1-2, with Alessandro Pier Guidi in the #51 Ferrari 488 GTE EVO seven seconds ahead of his teammate Miguel Molina in the sister #52 Ferrari 488 GTE EVO. Third is the #64 Corvette C8.R of Nick Tandy, doing an excellent job of fending off the Porsche attack from Richard Lietz, in the #91 Porsche 911 RSR-19, and Kevin Estre in the sister #92 Porsche 911-RSR-19.

This would currently hand the championship to #51 Ferrari’s Pier Guidi and teammate James Calado.

David Pittard is third in class in the #98 Northwest Aston Martin Vantage AMR.