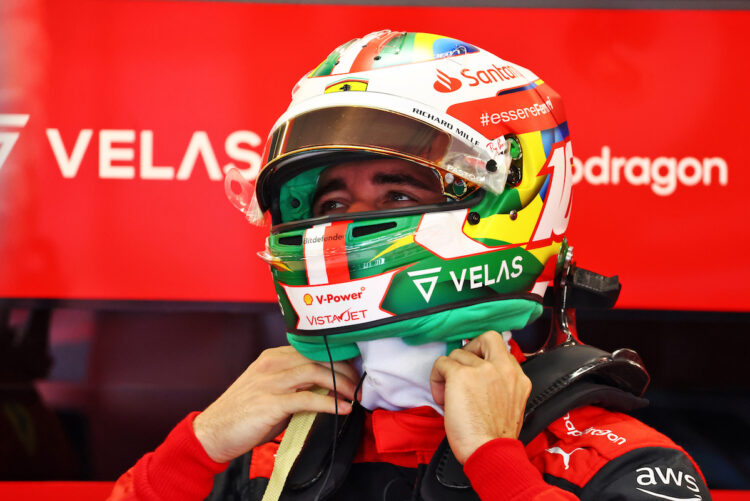 Charles Leclerc was left frustrated at the end of qualifying after he failed to set a representative lap time due to an incorrect tyre compound choice.

Leclerc was the only driver to emerge from the garage in Q3 on the Intermediate tyre, as all other nine competitiors in the session fitted the Softs.

Ferrari was banking on rain hitting the circuit immediately after the commencent of Q3, however, it held off long enough to allow those on the Soft tyres to set a hot lap.

Leclerc struggled for grip as he rounded the Interlagos track before he aborted his hot lap and returned to the garage.

The rain then began to instesofy, with Mercedes’ George Russell causing a red flag after beaching his car in a gravel trap.

Following the delay, the track was then too wet for the drivers to return using the slick compounds, with Kevin Magnussen bagging a shock pole position.

When told that all other drivers had managed a lap time on the Soft tyre, Leclerc stated sarcastically over team radio: “Nice. Beautiful, fucking beautiful.”

Ferrari explained after the session that it took a gamble at the start of Q3, opting to split tyre strategies with both Leclerc and team-mate Carlos Sainz.

Speaking after the session, Leclerc vented his frustration amid a season in which Ferrari has been criticised for on-track mistakes it has made.

“We were expecting some rain, which never came,” he said. “I will speak with the team and try to understand what we can do better in those conditions.

“But I’m extremely disappointed, the pace was there. We need to get on it and do everything good for the rest of the weekend.

“I accepted the decision to go on Inters, and then I just waited for the rain that never came.”