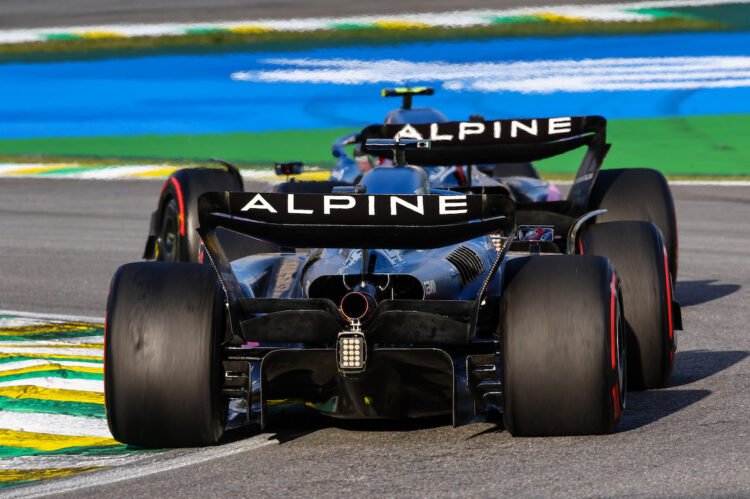 Fernando Alonso has been handed a five-second time penalty for colliding with team-mate Esteban Ocon on the opening lap of the F1 Sprint from Sao Paulo.

As a result, Alonso now classifies in 18th place.

The duo had already come together earlier in the lap at Turn 4, when they battled side by side for position.

Alonso attacked Ocon as they were at high speed on the run to the start/finish line, but was slow to pull out of the slipstream.

As a result, contact was made and Alonso suffered front wing damage that required a pit stop, while Ocon’s car was also hurt due to the incidents.

“Alonso started a pass on car 31 at turn 15,” read a statement from the stewards.

“The team noted that Ocon was unusually slow because of the aero damage due to the incident at turn 4, however the Stewards determined via telemetry that Ocon was at similar speeds to other cars at the same point on the track that were not in a tow.

“Alonso, however, was significantly faster as he had the tow, and – as he admitted in the hearing – slightly misjudged the time to pull out and struck Ocon from behind, his front wing striking Ocon’s rear tyre.

“The Stewards found that Alonso was wholly at fault for the collision, which at those speeds and at that location on the track was dangerous.”

Alonso was also issued two penalty points on his Super Licence for the collision, bringing his total tally to six across the last 12 months.

Alpine team boss Otmar Szafnauer criticised the pair following the race, stating that they had let the team down.