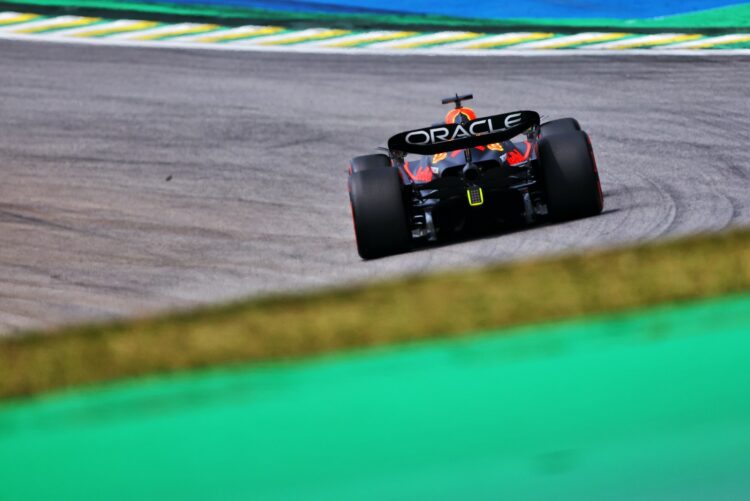 Haas driver Kevin Magnussen claimed a shock pole during a rain-hit session at Interlagos after setting the best time on his first push lap in Q3, as conditions worsened.

Verstappen was two-tenths of a second behind Magnussen after his opening push lap in Q3 and it proved to be his best, as a red flag period was followed by intensifying rain, denying drivers the ability to improve.

“We were working with pretty tricky conditions today and I locked up into turn eight which cost me pole today,” he said.

“It’s just difficult out there and you have to see how far you can push, but you don’t want to make any big mistakes that can be costly.

“Tomorrow is looking good but in these conditions anything can happen. We are still up there at the front which is the most important thing.

“Let’s see how competitive we are going to be tomorrow in the race, we have no clue what will happen with the weather but that always makes Interlagos so special for everyone.”

Team-mate Sergio Perez wound up only ninth after his optimum Q3 push lap was influenced by the presence of the Inter-shod Charles Leclerc.

“It was an unfortunate qualifying,” said Perez. “I was held up by Leclerc and Ferrari. It was very clear to me that he was too slow on the inter on the out lap and I thought he was going to pit.

“I was expecting him to box and go onto the slicks. Instead, he stayed in front of me and I had to finish my lap just behind him, that meant I lost too much time.

“We will never know where I could have finished, top three should have been possible today but instead we finished P9 and I am super disappointed with the result.”