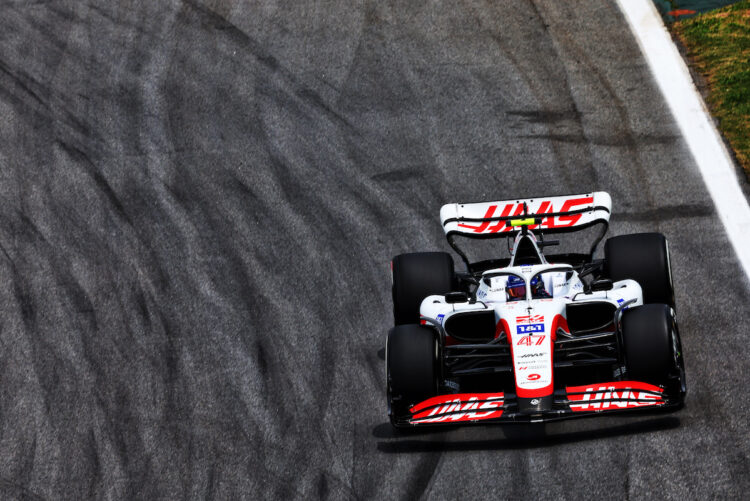 Mick Schumacher suffered a disappointing qualifying outing in Brazil on Friday, ending Q1 as the slowest driver in the session.

The German driver will start Saturday’s sprint from the back of the field, while team-mate Kevin Magnussen took his maiden pole position in changing conditions.

Following his final hot lap attempt in Q1, Schumacher appeared bewildered over the team radio after being informed that his effort wasn’t enough.

It led him to admit confusion over his pace, stating that he thought his lap was enough to see him progress beyond the opening qualifying segment.

“For me it felt like an OK lap, I felt like we had enough margin to get through with it,” Schumacher said. “But seemingly, I’m last.

“A bit confusing, it seems I maybe underestimated the grip. The track looked pretty damp but maybe it wasn’t as damp as I thought. It’s very frustrating, I think we had a good car.

“It just means that tomorrow that the job will be a bit harder, for sure. But nothing is done, so I’m still optimistic.”

The result came at a difficult time for Schumacher, as his F1 future is currently up in the air.

Haas is set to soon make a decision regarding its driver line-up for 2023, with Schumacher reportedly going head-to-head with Nico Hulkenberg over the vacancy at the US-owned squad.

Guenther Steiner, Haas’ team boss, has backed Schumacher to recover across the sprint and the grand prix from his lowly qualifying result.

“I think he needs to try to get as much positions as possible to start good on Sunday, there are more points on play on Sunday,” he told Sky F1.

“Today, he went out I think he was a little too hesitant to put a lap down because we just changed to dry tyres. But even starting from there, we saw what was possible today.”