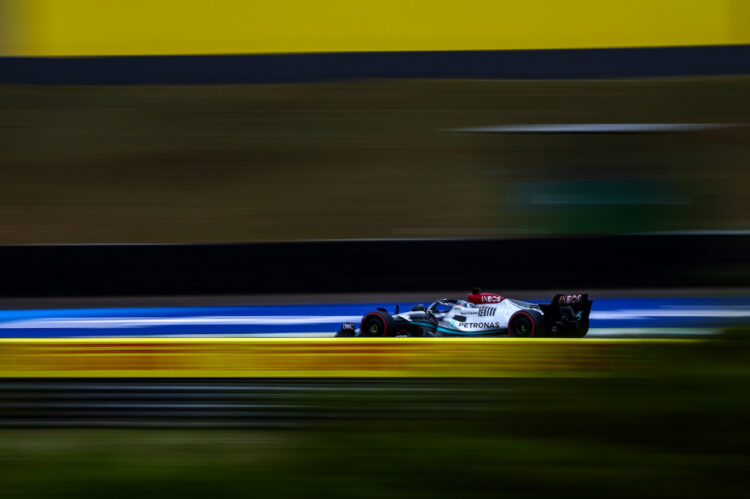 George Russell has revealed that he broke his headrest due to how much his Mercedes car was bouncing through the gravel during Q3 in Brazil.

The headrest is an important piece of safety equipment in the event that a driver collides with the wall during a session.

Russell locked up on the entry to Turn 4 in conditions that were gradually worsening, and skated through the gravel.

As he attempted to recover from his off-track moment, he spun the car on the wet tarmac and beached the Mercedes W13 in the gravel, eliminating himself from contention.

The session was then red-flagged, and as track conditions didn’t improve, Kevin Magnussen took pole position for the first time.

Russell’s best attempt in Q3 places him in third place for the start of the Sprint on Saturday, behind the Haas of Magnussen and reigning F1 champion Max Verstappen.

“I was getting a really bad headache to be honest,” Russell said. “I’ve broken the headrest because my head was banging so much.

“It was a pretty unpleasant experience. I lost the rear, I booted it and wanted to do a 360.

“And then I dipped the rears in the gravel, probably not the wisest choice I’ve ever made, but as it turned out, we knew that first lap was it all.

“It was such a unique experience because as the lap progressed, the rain was falling harder and harder. I went into the last corner and it was a lot wetter than it was the lap before, so we had to be really tentative.”

Russell congratulated Haas for its pole position achievement: “A massive congratulations to Kevin and Haas.

“This is what Formula 1 and sport is about, to have some crazy results like this. For us, P3 is a good place to start the Sprint tomorrow.”

Despite the severity of the bouncing, Russell is not expecting that Mercedes will be forced to change any parts due to damage ahead of Saturday’s on-track action.

“There should be no damage,” he said. “I’m always a bit tentative when it’s being lifted onto the tow truck.

“There’s a lot of gravel so the guys are going to have to take the car to pieces to make sure we got all the gravel out, but we should be OK.”