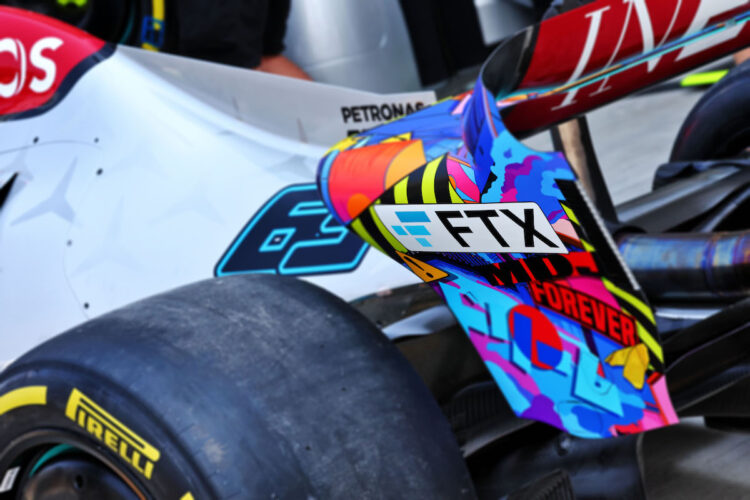 Mercedes have suspended their sponsorship with the Bahamas-based cryptocurrency exchange following the company’s plunge into bankruptcy with all company logos being stripped from the W13’s livery.

Boasting the title of the world’s second-biggest cryptocurrency exchange, FTX was thrown into turmoil after a report came out last week that alleged that a house-owned hedge fund held billions of dollars worth of FTX’s own currency, FTT, and had been using it as collateral in further loans.

Such actions could provide catastrophic if the value of FTT fell low enough which is what happened when the report was brought to light.

The value of FTT fell from $25 per token to less than $2 each in just a few days.

To make matters worse for the company, they are consequently being investigated by the USA’s Securities and Exchange Commission (SEC) over the alleged misuse of customer deposits in those loans.

While it looked like Mercedes was still going to run the FTX sponsor stickers of the W13 this weekend in Sao Paulo, the team have since released a statement which has clarified the situation.

“As a first step, we have suspended our partnership agreement with FTX,” the team said in a brief statement to Motorsport.com.

“This means the company will no longer appear on our race car and other branded assets from this weekend. We will continue to monitor closely the situation as it evolves.”

FTX has also been removed from the Partners section of the Mercedes-AMG F1 official website.