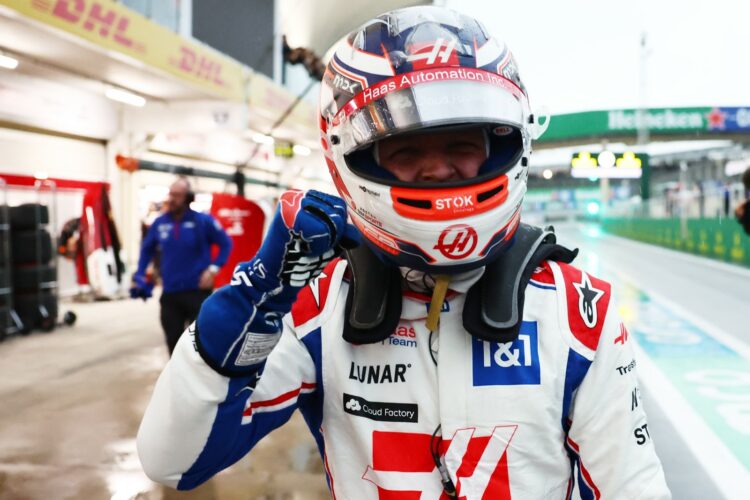 Kevin Magnussen took the first Formula 1 pole position of his and Haas’ career in a session which started and ended in the rain with some dry running deciding the grid.

The Danish driver beat Max Verstappen and George Russell and will start Saturday’s Sprint Race from the front of the pack.

Lando Norris will start from fourth, ahead of Carlos Sainz alongside Esteban Ocon.

The session opened in Q1 under wet conditions with an afternoon shower meaning every driver started on the intermediates.

On a rapidly drying track, Pierre Gasly was the first driver to make the switch to the soft-compound dry tyres and was joined by the rest of the grid after a few purple laps on the timing sheets.

The times then started to tumble with everyone starting to improve, lap after lap.

Lando Norris closed the session on top, beating Hamilton by three-tenths of a second.

Red Bull, Ferrari and Mercedes all started Q2 on sets of scrubbed soft tyres and so it was Norris again who found himself on the top of the timings after the first round of flying laps.

Esteban Ocon reported droplets of rain on the radio which was backed up by George Russell and Alex Albon.

Drivers scrambled to get a representative lap on the track as the reports of rain started to increase.

Sebastian Vettel, Albon and Gasly were unfortunate to miss out on the top ten shootout by less than a tenth of a second.

Daniel Ricciardo and Lance Stroll also dropped out in Q2 on 14th and 15th respectively.

As the ten cars lined up at the end of the pit lane to get Q3 underway, Leclerc was the only driver in the queue with the green-walled intermediate tyres with everyone else on softs.

While rain was reported as dropping in any minute, the dry tyre runners tried to get a lap in before they had to join the Ferrari on the intermediates.

Ferrari rolled the dice and brought Leclerc in for some slick tyres as the other nine drivers got a lap in on the drys.

George Russell brought out a Red Flag down at turn four after going off the track and getting himself beached in a gravel trap.

With the stoppage of the session helping the rain catch up to the circuit, it was Magnussen who was at the top of the timings ahead of Verstappen and Russell.

The session later resumed with eight minutes remaining and it was Perez who was first out on the intermediate tyres.

Leclerc was the biggest loser of the session with his early intermediates call and the eventual red flag meant the Monegasque didn’t set a lap and will start from tenth.