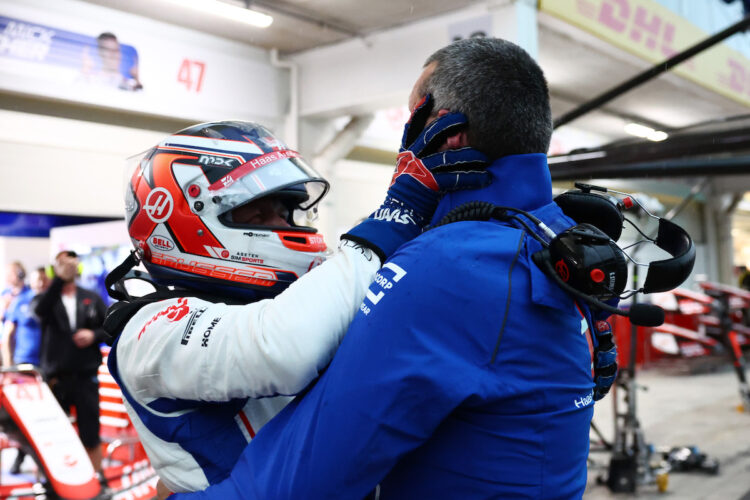 Kevin Magnussen has heaped praise on the Haas team after he took his and the US-owned squad’s first pole position in Formula 1.

At the start of Q3, all drivers lined up at the end of the pit lane in an attempt to set a lap time as early as possible due to impending rain.

Magnussen was the first to set a time which proved to be the fastest after the first round of laps, before Mercedes’ Geroge Russell made a mistake at Turn 4 and beached his car in the gravel.

During the red flag period that followed, rain fell heavier on the track and when it resumed, the track was too damp to improve, leaving Magnussen on top of the timesheet.

“I still can’t really believe it,” Magnussen told Sky F1. “What a phenomenal job the team did to put me out on the pit lane to get me the best piece of track.

“It was starting to rain, that was the crucial part today, getting the best track for me. Amazing job by them.

“The car was strong, we were in contention for Q3. We were looking good enough for that. But it was always a bit drizzly and not fully dry.

“I think our car was perfect for that, but today the big difference was getting me out as the first car and giving me the best piece of track there today.”

Magnussen returned to Haas this year after sitting out the 2021 campaign, believing that his F1 career had slipped away at the end of 2020.

The Dane made his debut with McLaren in 2014 and scored a podium in his very first race – however he says that his pole position with Haas is a more shocking result.

“I came in as this arrogant little kid thinking I was the king of the world. I had a lot of lessons after that, showing [me] how difficult it is in this sport. Now I’m on pole position, so I just got to enjoy it.

“I just got to enjoy this moment until tomorrow, lining up on pole position and seeing my car, my white little Haas car on pole position, it’s going to be a lot of fun.”

Magnussen will start Sunday’s Sprint Race from the front of the field, with two-time F1 champion Max Verstappen alongside him on the front row.

When asked if he is going to attempt to hold out for the sprint win, Magnussen replied: “Absolutely, I’m a racing driver and I’m on pole position!”