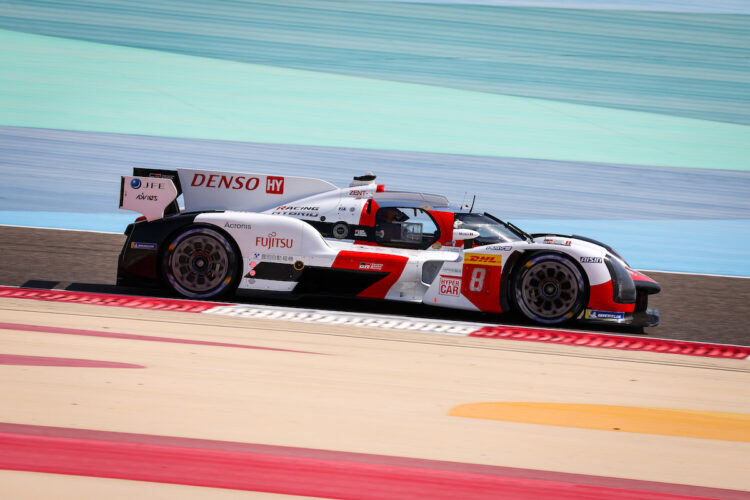 Brendon Hartley took pole for the FIA World Endurance Championship’s season finale, the 8 Hours of Bahrain, with a late lap of 1:46.800 in the #8 Toyota GR010.

Paul di Resta initially held provisional pole for the #93 Peugeot 9X8 squad, but Hartley pipped the Scot to the post, by 0.810.

Crucially, this gives the #8 Toyota crew an extra point in their championship battle against the #36 Alpine of Andre Negrao, Matthieu Vaxiviere and Nicolas Lapierre. Vaxiviere qualified that car fifth, a second and half off Hartley.

The #7 Toyota of Mike Conway was third, followed by Gustavo Menezes in the #94 Peugeot.

Third in class was Filipe Albuquerque in the #22 United Autosports Oreca 07-Gibson.

The two title contenders were third and fourth, with #92 Porsche 911 RSR-19’s Michael Christensen third and Alessandro Pier Guidi, in the #51 Ferrari 488 GTE EVO, fourth. However, Pier Guidi spun on his final timed lap, leaving him unable to improve.

Nick Tandy rounded out the class in fifth in the #63 Corvette C8.R.

Finally, in GTE-Am, Sarah Bovy continued a strong run of form for the #85 Iron Dames Ferrari 488 GTE EVO, setting a 1:59.186 to take hers and the team’s second WEC pole. Ben Keating, driving the #33 TF Sport Aston Martin Vantage AMR, couldn’t quite match Bovy, with the Amnerican over half a second off. Christian Reid was third in the #77 Dempsey-Proton Porsche 911 RSR-19.