Horner: Red Bull has spoken to Norris ‘a couple of times’ 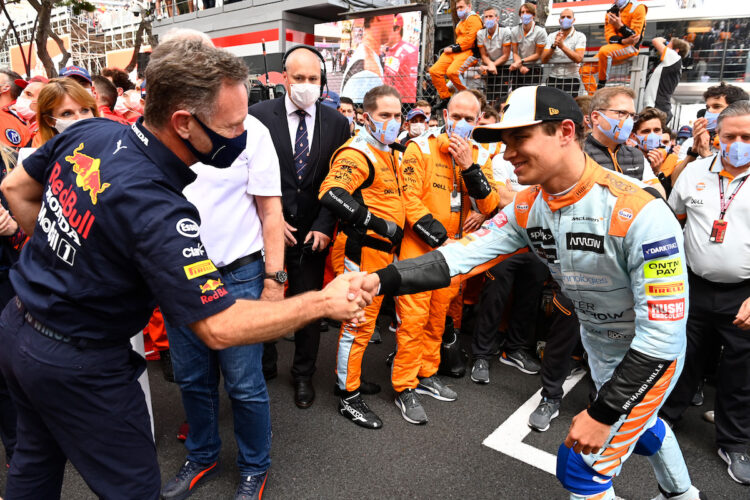 Red Bull team boss Christian Horner says that his team has spoken to Lando Norris more than once over the last number of years.

Norris made his F1 debut with McLaren in 2019, and is currently signed up to race with the team until 2025, having penned an extension earlier this year.

Prior to his debut in F1, Red Bull approached the Briton in an attempt to sign him to complete the 2018 season in place of Brendon Hartley at its sister team, Toro Rosso.

However, McLaren rejected the approach and promoted him to a full-time seat from a reserve role in 2019.

Norris stated in Mexico City last weekend that he has held talks with Red Bull on a number of occasions across the years, including prior to his most recent extension.

Horner confirmed that Red Bull has shown interest in Norris on numerous occasions.

“We’ve spoken with Lando a couple of times over the years,” he said.

“But every time we’ve had a conversation, the next day he’s signed a contract with McLaren.”

Red Bull currently has Sergio Perez signed to race alongside Max Verstappen until at least the end of 2024.

Horner denies that the team could look to poach Norris from McLaren, believing that the six-time podium finisher is committed to the Woking-based squad.

“He’s on a long-term contract with McLaren and looks like he’s going to be there for a few more years.”

Norris has set a target of winning races with McLaren in 2024, as the team looks to return to the front of the grid following a difficult decade.

He will partner Oscar Piastri at the team next season, with the rookie replacing Australian compatriot Daniel Ricciardo.