Russell open to chance of working with Ricciardo at Mercedes 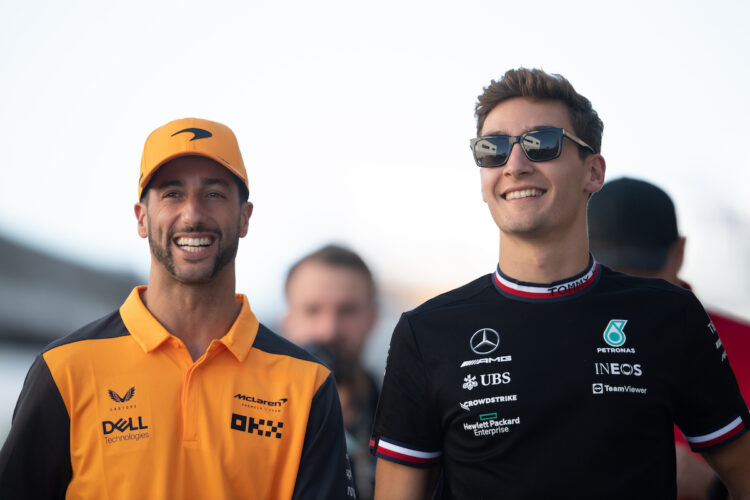 George Russell says that he would welcome the chance to work alongside Daniel Ricciardo at Mercedes in 2023.

Ricciardo will depart McLaren at the end of the current campaign, having endured a difficult two seasons racing for the Woking-based squad.

His original contract was set to expire at the conclusion of 2023, however both parties agreed to separate one year early.

The Australian has confirmed that he won’t be racing in F1 next year but has asserted that he wants to remain in the sport working with a team.

Ricciardo has been linked to a third driver role with Mercedes, supporting Lewis Hamilton and George Russell from the sidelines with the hope of returning to a full-time seat in 2024.

Hamilton has previously claimed that Ricciardo is “too talented” for a reserve role, but was receptive to the idea of working with him.

Speaking to Sky Sports at the Mexico City Grand Prix, Russell also spoke positively about the scenario: “Yeah, it would be interesting.

“I’d like to see that. We have to see what he wants to do in the future.”

“I am promoting his merch! Honestly I just like it,” Wolff laughed. “They took a photo of me and posted it online.”

“I gave George a sweater,” Ricciardo added. “Toto messaged saying he really liked it so I gave him one too.”

Ricciardo enjoyed arguably his strongest race of the 2022 season last time out in Mexico, as he drove to a seventh-place finish for McLaren.

The result came despite the fact he incurred a 10-second time penalty for colliding with AlphaTauri’s Yuki Tsunoda during the grand prix.