Tsunoda incident was not ‘black and white’ – Ricciardo 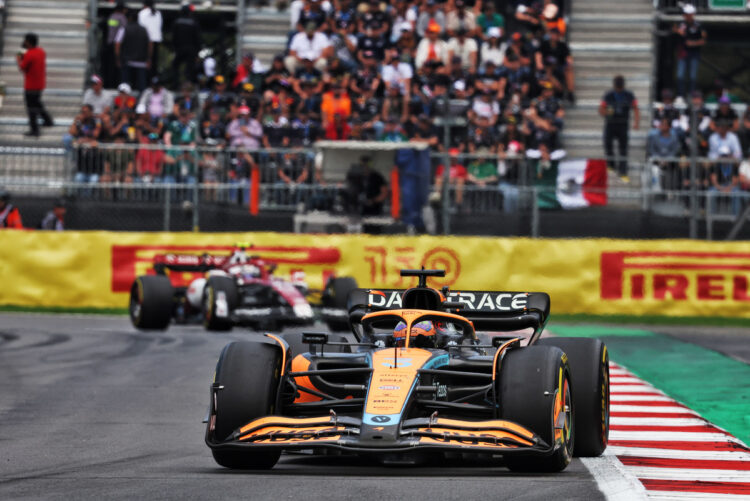 Daniel Ricciardo is prepared to take “responsibility” for his collision with Yuki Tsunoda in Mexico on Sunday, but he is not sure it was entirely his fault.

The Australian was making his way up the order on Softs having started on Mediums, when he encountered the AlphaTauri.

Their battle for 11th saw the Australian poke his nose down the inside into Turn Six, and as Tsunoda turned in to meet the apex, the pair made contact, sending the young Japanese driver airborne.

Tsunoda was forced to retire as a result of the damage, and Ricciardo was handed a 10-second penalty for his troubles.

The setback almost seemed to galvanise the 33-year-old into a superb recovery drive, as he cleared Lando Norris, Valtteri Bottas, Esteban Ocon and Fernando Alonso.

He then built an advantage of over 10 seconds over Ocon in eighth to hold onto seventh place, earning the Driver of the Day award in the process.

Ricciardo is not sure where his pace derived from, but he felt more comfortable with his McLaren during the race than he often has in a tough couple of seasons in Papaya.

“I wish I knew, in terms of I wish we had this more often,” he told SpeedCity Broadcasting, when asked how he found his impressive performance.

“But I can’t just do one good race and say, ‘Hey, look!’ but the truth is I think when I do have a little bit of speed it’s nice to be able to show it.

“People forget and it’s just one race, but I just felt like I could lean on the car and had a bit more confidence in it and it returned the favour. Unfortunately, it hasn’t been often enough that I’ve had that feeling, but we ran with it.”

As for the penalty, the eight-time race winner indicated that he was not entirely culpable.

“Didn’t make it easy with the penalty. I saw a replay, I obviously take responsibility but I don’t think it was that black and white,” added Ricciardo.

“I held the apex, I honestly didn’t plan on actually overtaking him, I just wanted to keep him a little wide to then get him on the exit as I definitely had a much better tire, so I was just doing what I could to set him up.

“But in any case that obviously was a little bit of a low moment, but otherwise still to pull the ten seconds I was very happy.”

Norris finished ninth behind Ocon after Alonso’s retirement, helping McLaren bring the gap to Alpine down to seven points in the fight for fourth in the championship.