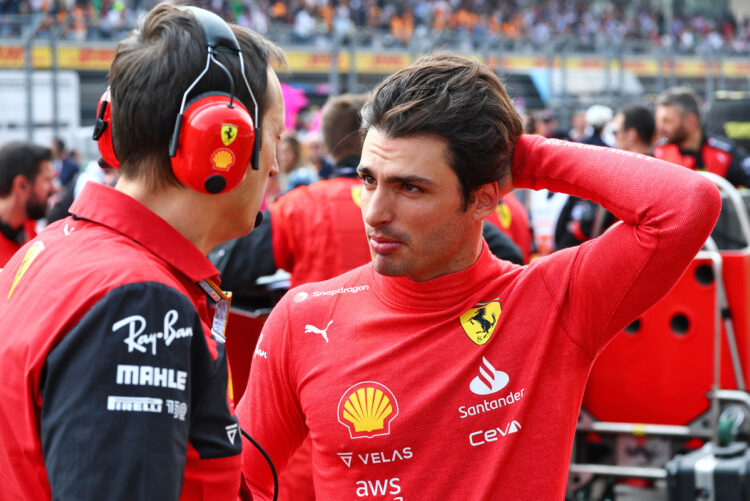 Ferrari’s Carlos Sainz accepted that fifth and sixth was the best result he and Charles Leclerc could have managed after a tough weekend in Mexico.

The Scuderia arrived in Mexico City having last managed a race win in Austria through Leclerc, despite starting four of the previous eight races on pole.

Both Red Bull and Mercedes looked to have the edge over the Maranello-based squad in the build-up to qualifying at the Autodromo Hermanos Rodriguez, which was solidified with Sainz qualified fifth ahead of seventh-placed Leclerc.

The Monegasque cleared Valtteri Bottas on the opening lap, and the Ferrari drivers remained where they were for virtually the entirety of the afternoon.

Max Verstappen won ahead of Lewis Hamilton and Sergio Perez, with George Russell in fourth, before Sainz and Leclerc came home around a minute off the lead.

At a circuit known for its high altitude and subsequent engine alterations, Ferrari knew it was going to struggle last weekend, so 18 points, in Sainz’s mind, was the best result on the table.

“I think I drove a pretty good race, but when you see the distance to the leaders, there was not much more in it,” he said after the race.

“We knew the compromises we had to take this weekend. We knew going into the race we were going to be slow, but we maximised the points that the car could take today at least, on a positive note.

“We didn’t lose too much, and we can focus on Brazil and Abu Dhabi [where] we expect to be back on the pace.”

Having crashed out of the Japanese Grand Prix, before being hit by George Russell on the opening lap in Austin, Sainz is happy to have run at a consistently good pace.

“I’m sure when you ask Mattia [Binotto, team principal] or Laurent [Mekies, race director] they will talk about it clearly, we will be open about it,” he explained.

“But, from my side, it’s a technical thing that I’d prefer not to comment too much. I prefer to focus on the positives, and I know it was a good race for me, finally.

“Without doing a race in a month, to get back in the car and do a strong pace, it was at least something positive.”

Sainz and Leclerc were occasionally seen wrestling the car through the middle sector in Mexico, but during the race, the 28-year-old felt that the ride was comfortable – the only thing lacking was the pace.

“Handling, yes, the handling was comfortable, I could do consistent lap times, consistent tyre management,” he added.

“But, we were just slow, and we didn’t have the pace compared to quali.”

After completing a full race distance for the first time since the Singapore Grand Prix, Sainz noticed that he was not feeling too physically drained on Sunday.

“I’m not sore, I’m okay. Even the altitude here can be tough but I think I drove a pretty good race. For once I was very quick, and unfortunately we are one minute off the pace.”

The Autodromo Jose Carlos Pace in Brazil is also located at high altitude, but Ferrari does not expect to face the same troubles there as it did last weekend.

“I don’t think so, I think Austria is at high altitude and we are okay,” affirmed Sainz.

“Brazil is similar to Austria, so I expect to be okay.”

Mercedes’ improvements and Red Bull’s 16 wins this season have made them early strong contenders for next year, but Sainz is confident that Ferrari will remain in the fight too despite its dip since the beginning of the year.

“New year, new car, new regs even with the floor,” he said. “We have another chance and I fully trust that the team will produce another great car like we had this year, and that we will learn from the mistakes this year.

“I will learn from the mistakes I did this year, and we will be more in the fight and ready to fight. I’m looking forward also for [Mercedes], it looks like they are going to join us at the front.”